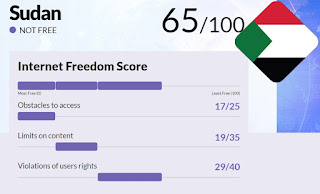 Since last year Internet freedom in Sudan declined due to a crippling economic crisis that made access to ICTs prohibitively expensive for everyday users. The government also exerted increasing control over the online sphere by arresting online journalists and activists and introducing new restrictive laws and also blocking access to social media used to organise nationwide anti-government protests triggered by an economic crisis.


Sudan has been rocked by near-daily demonstrations in the past over two weeks.

In a Northeast African country where the state controls traditional media, the internet has become an important information battleground. Of Sudan’s 40 million people, about 13 million use the internet and more than 28 million own mobile phones.

According to local media, about 13 million of Sudan’s 40 million people use the internet.
Hashtags in Arabic such as “Sudan’s_cities_revolt” have been widely circulated from Sudan and abroad. Hashtags in English such as #SudanRevolts have also been used. 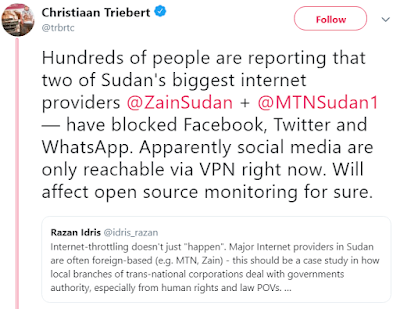 “Social media has a really big impact, and it helps with forming public opinion and transmitting what’s happening in Sudan to the outside,” said Mujtaba Musa, a Sudanese Twitter user with over 50,000 followers who has been active in documenting the protests.

NetBlocks, a digital rights NGO, said data it collected, including from thousands of Sudanese volunteers, provided evidence of “an extensive internet censorship regime”.