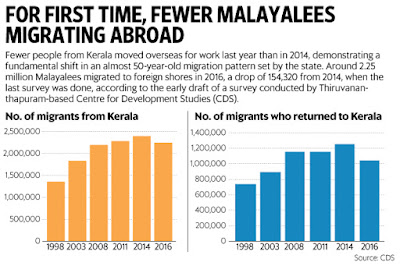 Factors like the declining population in the 19-25 age-group and stagnant wages in the Gulf countries could be responsible for migration from Kerala declining 11 per cent between 2013 and 2018, a new study says.

"Of the 2.1 million emigrants (from Kerala in the Gulf and elsewhere), 15.8 per cent are females. However, there is a reduction of 3 lakhs migrants, which is one-tenth of the number of migrants in 2013. In 2018, we reached a stage where migrants figures shown a negative growth of 11.6 per cent," S. Irudayarajan, who led the Kerala Migration Survey (KMS) 2018 told.

The survery is the eighth in a series of studies on migration undertaken by the Centre for Development Studies (CDS) since 1998. CDS is an internationally renowned, self-governing institution known for its cutting edge research in applied economics and topics germane to socio-economic development. It was established in 1971 by the late Professor K.N. Raj, considered the archistect of India's First Five-Year Plan (1951-56), and a former Vice Cancellor of Delhi University, with whom he was associated for 18 years.

Explaining the reason for the decline Irudayarajan said it could be due to the cumulative effects of the demographic advances which have decreased the population in the migration-prone age-group (15-29 years) as Kerala attained replacement fertility level in around 1987.

"Wages in the Gulf economies have not improved after the global economic crisis. This has led to lower savings, de-motivating them to migrate. Another reason is wages in the domestic economy have increased compared to other states," reveals the report.

Explaining further he said the price of oil, on which the Gulf economy is based has been declining since 2010.

The study was conducted through a survey of 15,000 households from January 1-March 31 and was funded by the Kerala government's Department of Non-Resident Keralites' Affairs.

The estimated total annual remittances to Kerala have been placed at 85,092 crore.
"Of the total remittances at state level, Malappuram district receives 21 per cent, followed by Kollam (15 per cent), and Thrissur (11 per cent)," study reveals.

Concluding his findings, he said the long history of migration from Kerala to the Gulf is in its last phase.

"However, remittances to the state have increased. This is due to the fact that Keralites' in the Gulf have climbed the social ladder and are earning higher wages, allowing them to remit more. Thanks to the weakening rupee, families remit more. The KMS 2018, has also confirmed that the migration from Kerala is falling and return of migrants is on the rise," study says.

On the study of return migrants as estimated by KMS 2018, it is 1.29 million, which is about 60 per cent of the number of emigrants.

"The KMS 2018, would be an invaluable pointer for further policy formation in terms of international migration and also employment schemes of the government. The last 20 years of KMS proved that almost 40 per cent of total remittances to the state were used by emigrants in land, housing and its assets. 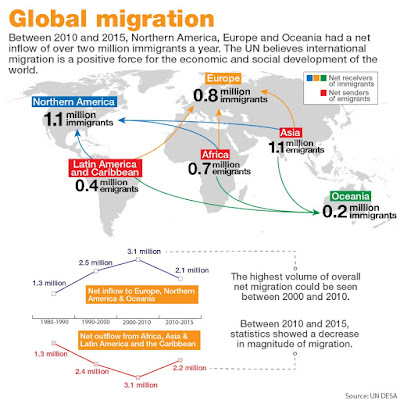 "With the recent devastating floods, and the massive loss of physical capital and land value, migration can be conjectured to increase at least in the short run. We expect the trend will change after the floods as migration will play major role as a livelihood option for the New Kerala, where we expect further migration and remittances. This requires another quick assessment by the Government of Kerala," said S. Irudayarajan, who led the Kerala Migration Survey (KMS) 2018 .

However, about one billion inhabitants were added to the world over the past 12 years, bringing the total population to 7.6 billion as of mid-2017 with a net inflow of over 2 million immigrants every year, according to a new report published by the United Nations.

Although the UN believes international migration is a positive force for the economic and social development of the world.