'In a turbulent era, the media and governance must define its values and principles'

Now we are living through another extraordinary period in history: one defined by dazzling political shocks and the disruptive impact of new technologies in every part of our lives. In this turbulent era, the media must define its values and principles. But the turbulence of our time may demand that we do more than adapt.

The circumstances in which we report, advocate, produce, distribute and obtain the news have changed so dramatically that this moment requires nothing less than a serious consideration of what we do and why we do it.

The answer to this question is in our past, our present and our future. I want to lead a mission that relates to the world in a way that reflects our history, engages deeply with this disorientating global moment, and is sustainable for ever.

According to Freedom on the Net 2017 report, Governments around the world are dramatically increasing their efforts to manipulate information on social media, threatening the notion of the internet as a liberating technology. 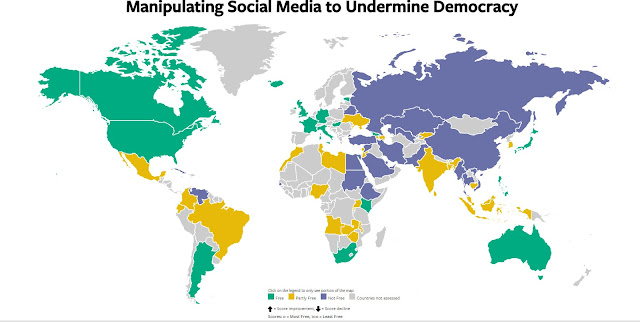 The “democratization” of content production and the centralization of online distribution channels like Twitter and Facebook has shaken up the media industry, and one unintended consequence has been the proliferation of fake news—intentionally false information that has been engineered to resemble legitimate news and garner maximum attention. Fake news has existed since the dawn of the printing press. However, its purveyors have recently developed sophisticated ways—such as gaming the algorithms of social media and search engines—to reach large audiences and mislead news consumers.

Social media are increasingly used as a primary source of news and information, but users’ inability to distinguish between genuine news and lucrative or politically motivated frauds seriously reduces their value and utility. Although there is little information publicly available regarding the algorithms of Facebook, Google, Twitter, and other information gatekeepers, they have tended to promote viral or provocative articles that generate clicks, regardless of the veracity of their content. Just as upstart media organizations like BuzzFeed tailored the titles of real articles to suit Facebook’s NewsFeed, enterprising Macedonian teenagers crafted click-bait headlines for fake articles in advance of the November 2016 U.S. elections, profiting immensely from Google Ads placed on their sites. Such illegitimate news content appeared on social media platforms alongside articles from legitimate outlets, with no obvious distinction between the two.

The line between real news and propaganda is often difficult to discern, particularly in hyperpartisan environments where each side accuses the other of distorting facts. Societies with strong respect for media freedom and free speech allow citizens to consult a diverse range of news sources and develop an informed understanding of events. However, in over half of the countries included in the report, the online media landscape is warped by frequent bribes, politicized editorial directives, or ownership takeovers by government-affiliated entities and individuals—all of which Freedom House has observed for many years in such countries’ print and broadcast sectors. The result is often an environment in which all major news outlets toe the government line. 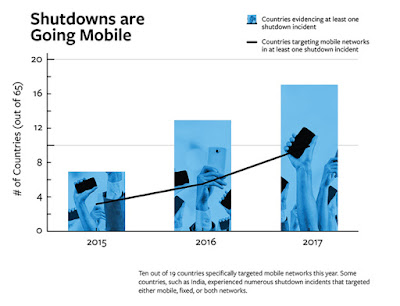 In a troubling new trend, the authorities in at least 10 countries deliberately disrupted mobile connectivity in specific regions, often targeting persecuted ethnic and religious groups. In China, for example, Tibetan and Uighur communities have faced regular mobile shutdowns for years, most recently in a Tibetan area of Sichuan Province where officials sought to prevent the spread of news about a Tibetan monk’s self-immolation to protest government repression. In Ethiopia, the government shut down mobile networks for nearly two months as part of a state of emergency declared in October 2016 amid large-scale antigovernment demonstrations by the disenfranchised Oromo and Amhara populations.

For many of the communities affected by such localized shutdowns, mobile service is the only affordable or available option for internet connectivity due to underdeveloped fixed-line infrastructure in remote regions. Consequently, the shutdowns can effectively silence a specific community, not only minimizing their ability to call attention to their political and social grievances, but also diminishing their economic development and educational opportunities.

Despite these often problematic regulations from governments, private companies are attempting to provide customers with improved security measures. Google has signaled its intention to roll out further protections against “man-in-the-middle” attacks on its Chrome web browser. Like Facebook, Microsoft, Twitter, and others, the company also alerts users who it suspects are victims of an attack by state-sponsored hackers.

While commercial protection can be expensive, some private initiatives have offered free protection for news outlets and human rights sites that cannot afford commercial fees.
Such services can assist in combating some of the most pervasive attacks, but civil society organizations and independent media outlets still struggle to keep up with the overwhelming array of tactics used by their opponents in cyberspace, let alone build up the necessary awareness and capacity to proactively prevent and mitigate these threats.
Reactions: