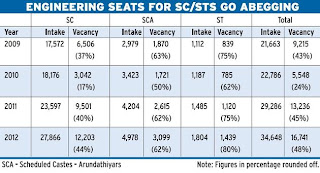 A staggering 27,488 government jobs reserved for scheduled castes and tribes and other backward classes are lying vacant with the maximum discrimination against these categories being in the educational sector, a report reveals.

According to the reports shared by the Asian Centre for Human Rights, out of the unfilled posts as of May 8, 2013, 12,195 are reserved for scheduled tribes, 8,332 for other backward castes and 6,961 for scheduled castes.

The report titled "India's Unfinished Agenda for Inclusion: A study on denial of reservation to the tribals in the government services and posts" said central universities were the most discriminatory against these communities.

In 2006-07, there were 46 ST professors against the sanctioned posts of 1,187. Their number fell to a mere four against the total posts of 1,667 in 2010-11 in central universities, the report said citing information provided by the University Grants Commission (UGC) under the Right to Information Act.

However, STs had better representation in the top echelons of the government, it added.

The data provided by the UGC shows that India's higher educational institutions remain the most casteist, possibly a reflection of the opposition to the reservation policy.

The population of scheduled tribes in India is over 840 million.
Reactions: