Hepatitis B (HBV) and Hepatitis C (HCV) infections are silent diseases which remain asymptomatic for decades. And due to lack of awareness about it, more than 80 percent HCV patients and over 60 percent patients with HBV are diagnosed at a stage when the disease is irreversible.

In result, India's Hepatitis burden is rising day by day due to the use of infected injections and unsterilised medical equipment as well as unsafe blood transfusions. In India, nearly two-thirds of the injections being used are unsafe, posing health hazards for the recipients. Unhygienic use of needles in acupuncture and tattooing also has a significant role in spreading hepatitis, according to experts.

Infact, there are five main Hepatitis viruses, referred to as types A, B, C, D and E.  Where Hepatitis A and E are typically caused by ingestion of contaminated food or water. But, Hepatitis B, C and D usually occurs as a result of parenteral contact with infected body fluids. Hepatitis B is also transmitted by sexual contact. 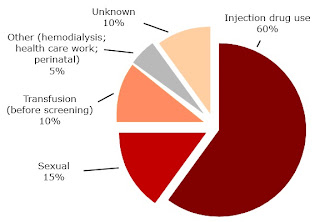 Usually, most patients in India get the Hepatitis B and C forms in childhood either through mother to child transmission or contact with other siblings and many times after being infected the problem becomes chronic and they become permanent carriers of the virus.

There is much need to organize a countrywide education campaign among health workers, patients and the community, especially in the rural areas.

Meanwhile, since April 2005, the government has also introduced auto-disabled (AD) syringes for all vaccinations under UIP in all states. AD syringes are single use, self-locking syringes that cannot be used more than once.

This prevents misuse and contamination and cross- infection through repeated use of unsterile injection or equipment. Routine screening of blood units for Hepatitis B and C has been made mandatory for all blood banks to detect and discard contaminated blood units.

Approximately 500 million people worldwide are living with either hepatitis B or hepatitis C. This means 1 in 12 people suffer from this deadly disease.

A Singapore-based group fighting the spread of viral hepatitis called for greater political will to combat the disease, as new data showed that one million people die from the illness in Asia annually, up from 695,000 in 1990. This translates to one person dying every 30 seconds from hepatitis, according to the figures, derived from the latest Global Burden of Disease Study led by the University of Washington.

However, in India, one out of every 100 are chronically infected by the virus (Hepatitis C)  and most among these 12 million people do not know they are infected.

According to Indian government figures, prevalence of Hepatitis C has been observed to be relatively higher in Punjab, Andhra Pradesh, Puducherry, Arunachal Pradesh and Mizoram.

Interestingly, several studies conducted in these states have highlighted different risk factors which are believed to have led to the relatively higher prevalence of the condition.

[FYI: July 28 also marks Professor Baruch Blumberg's birthday, winner of the 1976 Nobel Prize for his discovery of the virus that causes hepatitis B.]
Reactions: