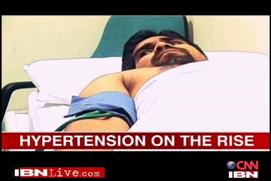 Before we talk of any reason behind this silent killer, lets know what is Hypertension?

Hypertension, also referred to as high blood pressure which is a major public health problem in India and its prevalence is rapidly increasing among both urban and rural populations. It is a condition in which the arteries have persistently elevated blood pressure. Every time the human heart beats, it pumps blood to the whole body through the arteries.Fast-moving lifestyles, unearthly hours at work, stress, addiction to alcohol and unhealthy meals are making more and more Indians fall prey to high blood pressure at a very young age.

The biggest problem with hypertension is that there are no symptoms. Thus people tend to be unaware that they have hypertension. It is common in urban Indian youth who silently suffer from high blood pressure without realising it and which ultimately leads to such major health problems like strokes. 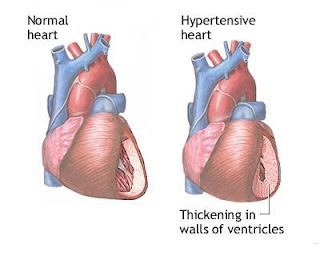 Though the exact causes of hypertension are usually unknown, there are several factors that have been highly associated with the condition. These include:


But the main reason behind is the Junkfood habits. Most of the youth  grab snacks like namkeens and samosas when hungry between meals. Not only do these have a high salt content but they are also sources of trans-fats. Youths are very casual about their health. Most of the time they are glued to TV sets or computers and have very little time for exercise.

In India, experts say a large number of people are in the pre-hypertension category - BP of 130/90 against the normal range of 120/90. People with BP of above 140/90 are considered to be in the hypertension category. The prevalence of hypertension ranges from 20-40 percent in urban adults and 12-17 percent among rural adults.

Undeniably, hypertension is the leading cause of mortality in India, resulting from coronary heart disease and stroke. It affects more than 100 million adults in India. While the number of individuals with hypertension is rapidly increasing in India, the detection, awareness, treatment and control rates are very poor.

Experts estimate that the number of patients in India with high BP is likely to rise from about 140 million in 2008 to nearly 215 million by 2030 along with an increase in the risk of complications such as heart attacks, strokes, kidney problems and other serious illnesses.

Given the seriousness of the problem, WHO has selected hypertension as its theme for 2013.

High BP is, however, both preventable and treatable.

For many people, lifestyle changes such as cutting down on salt, eating a balanced diet, avoiding harmful use of alcohol, getting regular exercise and avoiding tobacco use are sufficient to control blood pressure.

For others, medication is required, which is effective when taken as prescribed.

A simple measure like restricting the salt intake per person to less than five grams per day and half an hour of exercise can help control hypertension that is assuming epic proportions in the country.

How can hypertension be prevented?

Hypertension can best be prevented by adjusting your lifestyle so that proper diet and exercise are key components. It is important to maintain a healthy weight, reduce salt intake, reduce alcohol intake, and reduce stress.

In order to prevent damage to critical organs and conditions such as stroke, heart attack, and kidney failure that may be caused by high blood pressure, it is important to screen, diagnose, treat, and control hyper tension in its earliest stages. This can also be accomplished by increasing public awareness and increasing the frequency of screenings for the condition.


How fast-moving lifestyle is responsible of hypertension rise among Indian youths?     To Know, Watch the VIDEO below: