Malaria: A grave threat to millions ! 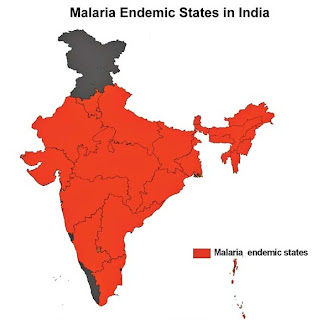 The number of deaths from malaria might be steadily declining, but health experts believe the mosquito sting continues to pose a grave threat to millions in India.

An estimated one million fresh cases of the disease - which causes body ache and fever - are reported in India each year. About 95 percent of the country's population resides in malaria endemic areas.

According to the World Malaria Report 2011, over 70 percent of the country's 1.2 billion population faces the risk of malaria infection, with an estimated 310 million people - one third of the total - facing the "highest risk".

The situation is very bad and it is an epidemic sort of issue. Malaria is quite rampant across the country, particularly in rural areas including major cities like Delhi.

Though the country has been effective in treating the disease with new medicine, the threat of plasmodium which causes the disease becoming resistant to new drugs remains.

Even though the plasmodium became resistant to old conventional treatment, new drugs have been effective for now. But, there are many countries like Cambodia and Thailand, it has developed resistance. Though the type is different, threat remains that it may also develop some resistance.

Most physicians no longer administer Chloroquine to patients as the plasmodium - P. falciparum - that causes the severe type of malaria has more or less developed resistance to the drug. The drug has only been effective in controlling the milder from of malaria.

The main vector of the disease in India is the female Anopheles Culicifacies, which is a small to medium sized mosquito. They usually breed in rainwater pools and puddles, burrow-pits, irrigation channels, seepages and sluggish streams. Extensive breeding is generally encountered following the monsoon.

Some experts, however, also say that investments in malaria control have yielded good returns in the past years.

"In last five years, there has been a constant reduction in the number of malaria cases in the country. The number of cases has gradually come down from 2 million in 2001 to about 1.2 million in 2011," said a senior scientist at the National Institute of Malaria Research.

Recent government data also shows a decline both in the number of malaria cases and related deaths.
According to National Vector Borne Disease Control Programme (NVBDCP), over 1.5 million cases of malaria were reported in the country in 2009 and 2010. The figure fell to 1.3 million in 2011 and to 1 million in 2012. Till March 25 this year, 72,327 cases have been reported.

However, in a clear contradiction to the government data, a 2011 study by Lancet stated that malaria actually killed an estimated 46,800 Indians in 2010. The country had over 10 crore suspected malaria cases but only 15.9 lakh could be confirmed in 2010, according to World Malaria Report 2011.

Experts, however, say more needs to be done to completely check the disease.

Towards this, the World Malaria Day celebrated on April 25, instituted by WHO during the 2007 World Health Assembly of 2007, aims to highlight the need for continued investment and sustained political commitment for malaria prevention and control.

According to the World Malaria Report 2011, malaria is prevalent in 106 countries of the tropical and semi-tropical world, with 35 countries in central Africa bearing the highest burden of cases and deaths. Compared to a century earlier, the area of malaria risk has reduced from 53 percent to 27 percent of the earth's land surface, while the number of countries exposed to some level of malaria risk has fallen from 140 to 106.
Worldwide, there were 655,000 deaths from the disease in 2010.

Fever, headache, muscle and joint pains. Later reduced consciousness, kidney failure and coma. The death rate in travellers returning to Europe and diagnosed in Europe is between 0.5% and 4%.

Diagnosis
Microscopy of a blood sample (thick and thin blood smear), rapid test finding a malaria specific protein in the blood and in some specialised laboratories detection of parasite DNA.

There are several drugs available. If the patient has taken drugs for prophylaxis the drug chosen for treatment should not be the same as used for prophylaxis. If the infection is severe the treatment is given intravenously.

Prophylaxis with a drug is primarily given to prevent disease from P.falciparum malaria. No prophylactic drug is entirely effective and no malaria drug without side effects. It is therefore important that the drug for prophylaxis is chosen with regard to the risk of being infected with malaria is balanced against the risk of side effects.

Comparing chloroquine and paludrine and lariam the risk of mild side effects are about the same, but lariam users have up to four times higher risk of experiencing neuropsychiatric side effects of which difficulty with sleeping is the most common.

Overall 2% to 5% of all users, no matter which drug they use, experience symptoms, which are suspected to be side effects from the drugs and lead to cessation of medication.

In general the traveller should be offered the most effective drug taking the destination, mode of travel and length of stay into consideration. In areas with very low risk like for instance Thailand, drugs are not recommended for prophylaxis, only traditional methods like repellents and impregnated mosquito nets.  In area with a high degree of resistance against chloroquine, like tropical Africa and part of South America and South East Asia, it is recommended;

Protection should be as good as possible, but it is unacceptable to have the travel spoiled by side effects, if the risk of infection is low.

The malaria mosquito primarily bites between dusk and dawn. The risk of infection can be much reduced by preventing mosquito bites, for instance by sleeping in closed, air-conditioned rooms or rooms with screened windows.