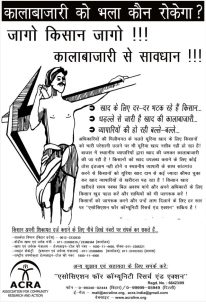 Millions of impoverished farmers in Bihar are paying a heavy price for using chemical fertilizers, which are not only costly but are also contaminating the drinking water and affecting the soil.

Expenses on chemical fertilizers, coming up to around 25 percent of the total cost of cultivation, constitute a significant expenditure incurred by the farmers in the state.

From 2010-11 to 2011-12, the price that Bihar farmers had to pay for chemical fertilizers increased between 20 percent and 45 percent, leading to additional burden for farmers who are already reeling under increasing cost of cultivation and financial insecurity.

It was based on research in five districts of Khagaria, Madhepura, Muzaffarpur, Nalanda and Patna. It revealed ground water and wells on farms showed pollution from nitrogen fertilizers.

In Nalanda, 65 percent of wells showed some degree of nitrate contamination. Although at present nitrate pollution is not above levels currently considered unsafe for human consumption, continuing with this trend of applying heavy doses of nitrogen fertilizers can lead to serious drinking water pollution.

The study also revealed that around 70 percent of the nitrogen in the gas-based chemical fertilizer used in Bihar farms might be lost, with both monetary and environmental impacts.

Specifically about 71 percent and 64 percent of the nitrogen applied to rice and wheat is roughly estimated to be not recovered in the harvested crop, and thus lost to water or atmosphere, with only a small proportion remaining in the soil, the study reveals.

Considered in financial terms, this loss represents an effective financial loss of Rs.1,462 per hectare, as per the recorded data from farmers of the five districts.

Moreover, these nitrogen fertilizers contaminate drinking water and might cause serious health impacts such as blue-baby syndrome (methemoglobinemia) and cancer.

With the advancement of the New Green revolution in eastern India, Bihar needs to adopt a holistic mission mode approach to promote ecological fertilization and farming practices with adequate funding to avoid an ecological disaster, as witnessed in the first Green Revolution belts of Punjab and Haryana.
Reactions: