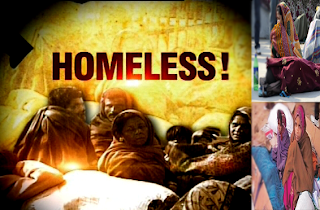 Hunched under a tattered blanket for a little warmth on road side or under the flyover in national capital (Delhi), a frail young and old homeless shivers day and night on a freezing note below four degrees Celsius. More or less outside India's premier hospitals as well, the large number of patients from far corners of the country can also be seen as braving cold and illness. Indeed, a sorry story, repeated each day of National Capital's searing summer and harsh icy winters.  It's a community of those in need and desperate for help.

For them, and hundreds of the homeless on the streets of Delhi, everyday is just another day and heralding the dawn of another day is swathed in misery. As the fog creeps in, these homeless usually get lost in the haze of poverty, misery and the biting cold, the only warmth from their breath misting in the air.

Some manage to find a place in a nearby shelter run by the hospital, while others find themselves unlucky and are forced to spend their nights under the open sky, coping with Delhi's harsh icy winter. All have the same story. They stay on the roads, biding their time till the next appointment, many too poor to go home and never come back again.

On serious note, as the temperatures plunged to bone-chilling levels in the capital, the Delhi High Court Wednesday on (2nd January 2013) said the homeless needed to protected from the extreme cold and directed the Delhi government to open more temporary night shelters apart from the existing 154. At present, there are more than three lakhs homeless in Delhi and only 7,500 (a mere 2.5 %) have got accommodation in night shelters.

After media relentlessly showed the plight of these homeless on Delhi streets, the government has finally taken notice as usual like every year. But, hope this year, government understand the pain of 'Homelessness', which is a cancer that eats away a person's happiness, joy and hope every second.
Reactions: