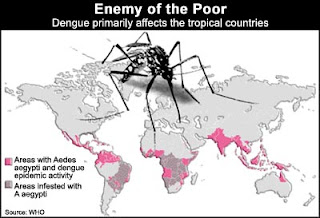 In a written reply in the Rajya Sabha, Minister of State for Health Abu Haseem Khan Choudhary said the percentage increase in number of cases and deaths between 2011 and 2012 (up to Nov 26) is approximately 97 percent and 34 percent respectively.

Minister Choudhary cited the unprecedented growth in population, unplanned rapid urbanisation and inadequate waste management as the reasons behind the outbreak.

He added that "increased distribution and densities of vector mosquitoes due to man-made, ecological and lifestyle changes" were amongst the main reasons for increasing dengue cases.

Water supply mismanagement, gaps in public health infrastructure, increased mobility of population, and poor infrastructure in the states to monitor mosquito breeding were some other reasons cited by the minister.
Kerala has reported the maximum of over 3,760 dengue cases, followed by Karnataka with 3,640 cases. Delhi, by mid-November, reported 1,980 cases.

Deaths from dengue have been highest in Tamil Nadu which reported 60 deaths. Maharashtra had 59 deaths and Delhi four deaths.
Reactions: