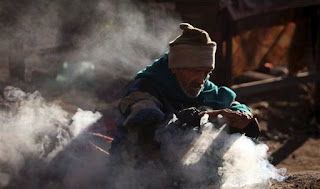 Every season has its own delights but as the saying goes "excess of everything is bad", whether it is summer, monsoon or winter season. If the scientists of the weather department are to be believed, this year round, stings of cold would be felt far more than the last year.

Compared to the last year, winter period is going to be bone crunching this year. Excessive cold of the December month compared the December last year has already given off this indication. The coming nights of 'Push' month could be nerve reeking.

Meanwhile, during this month as well, due to the intense cold wave currently enveloping north and east India has already risen to 40. Even though the Meteorology Department has forecast a slight improvement in the weather condition in coming weeks, with officials predicting a clear sky and light mist in the morning, cold winds are expected to sweep parts of the region.

The minimum and maximum temperatures in the capital are expected to range from 9 to 18 degree Celsius. Narnaul in Haryana continues to remain the coldest place with a minimum temperature of 2.2 degree Celsius. The fog is likely to hit train and flight schedules, that might even lead to cancellation or delay by several hours.

The mercury dropped below four degrees Celsius in many parts of Uttar Pradesh on Thursday (27 Dec. 2012). At least 30 people died in the freezing cold in the state. The state government allocated over Rs 15 crore for blankets for distribution among the poor and homeless. The tendering process, however, is still to begin in several districts.

The state government also announced shelter facilities and bonfires for the homeless and the destitute, but even these moves failed to fructify in time. Although there are nearly 17 shelter homes, these are largely poorly furnished, and the poor who seek shelter here are forced to lie on the ground, with no blankets.

On 27th December, there were 11 deaths reported from Bihar. The toll to inclement weather in the state this year has so far reached 18.  At Gaya, the minimum temperature dipped to 4.6 degrees Celsius, the lowest in Bihar. In Punjab, three deaths were reported on Thursday due to cold - two in Amritsar and one in Hoshiarpur. Maximum temperature in the state ranged from four to 10 degrees Celsius.

In Tripura, three people died as a mini-truck in which they were traveling overturned in foggy conditions. In Himachal Pradesh, where snow is celebrated each year and locals remain prepared for winter, no deaths were reported. In the higher reaches in Lahaul and Spiti, Kinnaur, Kullu and Shimla districts, there was light snowfall Thursday (27th December 2012).

Keylong in Lahaul and Spiti, which experienced 1 cm of snow, was the coldest town in the state with a low of 6.7 degrees Celsius below freezing point.

The weatherman said western disturbances are expected to recede after Dec 29, and Himachal would see drier days. The weatherman, however, warns that January could bring even harsher cold conditions.
Reactions: