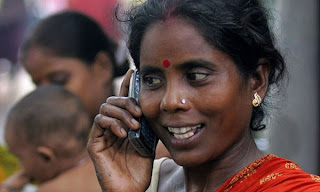 There are over one billion smartphone users worldwide, with Apple being credited with catalysing industry growth, a US study has found.

The revelation comes nearly two weeks after social networking site Facebook said it has over one billion users.

According to the report by the US research and consulting firm Strategy Analytics, the number of smartphone users surpassed the one billion mark during the third quarter of 2012.

Most of the world does not yet own a smartphone and there remains huge scope for future growth, particularly in emerging markets such as China, India and Africa," revealed Strategy Analytics.

It has taken 16 years for the smartphone industry to reach this historic milestone. But as per analytics forecast the next billion to be achieved in less than three years, by 2015.

The Nokia Communicator, introduced in 1996, was the world's first modern smartphone, but demand grew exponentially for the devices after Apple introduced the iPhone in 2007, which "revolutionised smartphone design.

Apple's latest smartphone, the iPhone 5, sold over 5 million devices in just three days after it was launched Sep 21.

While these numbers are impressive, Strategy Analytics estimates that one out of every seven people throughout the world owns a smartphone and that the device's penetration is still relatively low.
Reactions: