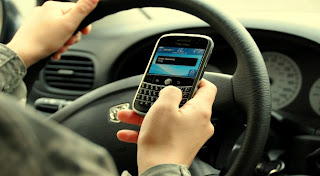 Mobile phones may have brought instant communication within the reach of all, but they are also fast turning into a global killer, accounting for 20 percent of fatal road accidents worldwide annually, half of which are on Indian highways alone.

Pioneering new technology, developed by Abdul Shabeer, doctoral scholar at Anna University of Technology, Coimbatore, and his colleagues R.S.D. Wahidabanu and H. Abdul Zubar, will jam mobile phones that truckers use on their long distance hauls and so prevent accidents.

"Lorry and heavy vehicle operators seldom keep their mobile phones switched off during such trips, but the distracting nature of the device, especially dialling a number, talking on the phone or just holding a phone while driving can be an immediate hazard on roads, Shabeer told.

The jamming system operates whenever the driver turns on the ignition. The jamming device receives radiation emitted by the phone. The device can tell whether the mobile phone is being used by the driver or the passenger.

"Once the driver's use of cell phone is detected, a low-range jammer deactivates the cell phone without affecting other passengers' cell phones. The system is powered by the vehicle," said Shabeer, who has graduated in computer science and engineering from Anna University, Chennai.

"Braking reactions of truck drivers often slow down when they are talking on a mobile phone. They are statistically more likely to be involved in road accidents as compared to those who keep their phones switched off," said Shabeer, who had previously worked with IBM India, Bangalore.

"Besides, mobile phone use causes distractions that delay reactions to traffic signals, leads to poor lane discipline and to drivers inadvertently shortening the gap between their vehicle and the one in front. All such factors can increase the chances of an accident," said Shabeer and colleagues.

"The complete system, which includes the jammer, would cost about Rs.2,500. Researchers are planning to commercialise this product," added Shabeer.

India is among the few countries that loses nearly three percent of its GDP to road accidents, Shabeer said.
"Although it is a well-established fact that India accounts for the highest number of road accident worldwide, there was no research on how many drivers using mobile phones were involved in road accidents. We carried out a survey involving more than 2,800 drivers. The results reveal that 20 percent of drivers worldwide have met with accidents due to mobile phone use," Shabeer said.

Shabeeer worked on this project with Wahidabanu, the principal of Government College of Engineering in Salem, Tamilnadu, and Zubar, a research scholar in the National Institute of Technology (NIT), Trichy. The project took nearly three years to develop.

The technology can be used on all vehicles globally.

"Other systems operative abroad, unlike ours, don't have the capability to differentiate whether a mobile phone was used by the driver or the passenger. Ours is a pioneering technology," Shabeer said.