Frequencies that touch lives and connect the community ! 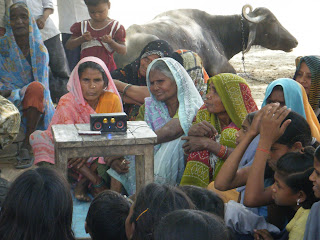 Gurgaon Ki Awaaz, Lalit Lokvani, Chanderi ki Awaaz ...India's community radio stations are reaching out to touch lives and livelihoods in little hamlets and towns across the country with useful nuggets of information spiced up with local folk music and radio plays.

India today has 135 community radio stations and another 300 are in the process of being set up. The government is giving a major push to this medium by holding workshops across the country, offering content sharing platforms, making it economically viable for those running such stations and also linking up with them via Facebook.

According to Supriya Sahu, joint secretary in the ministry of information and broadcasting, "Community radio station (CRS) is a medium that has potential to bring a silent revolution as it is connected to the daily lives of people. It is not a one way communication like television and radio where others tell and people have to listen. In this people participate, which is important in a democracy like ours," she said.

"In a country like India there should be thousands of CRS," said Sahu.

Gurgaon Ki Awaaz, on 107.8 MHz and run by a civil society-led community, caters to around 1.5 million listeners in villages in and around Gurgaon on the outskirts of Delhi. The station, which broadcasts in Hindi and Haryanvi, is very popular, says its director, Arti Jaiman.

Among community radio stations, southern India has the largest spread, led by Tamil Nadu with 22 stations. In comparison there are fewer stations in the northeast and states like Odisha, where the government wants more stations to be set up.

The government has set up content sharing platform for community radio stations. Like a station in Awadhi or Haryanvi may have very good programmes which could inspire other stations which could adapt through a content sharing platform. The platform, Ek Duniya Anek Awaaz (One World Many Voices) has been set up by the ministry in partnership with NGO One World South Asia.

According to Sahu, any non-profit organisation can apply to set up a CRS. It can be a society or trust, an NGO, an educational institution or Krishi Vigyan Kendra.It costs Rs.15 lakh-20 lakh (about 30,000 USD) to set up a station. Under the 12th Five Year Plan (2012-17), financial support will be given to eligible organizations that have been granted licenses to run CRS. The ministry has also sent a Rs.170 crore (Rs 1700 million) proposal to the Planning Commission for supporting the community radio movement in the country.

In order to help the CRS' become financially sustainable, the ministry has begun empanelling them with the Directorate of Advertising and Visual Publicity (DAVP), which would fetch them advertisements. Thirteen CRS have been empanelled so far and the others are keen to be empanelled.

The community radio stations air informative programmes laced with dollops of folk songs and humour.
They are basically entertaining; most stations have entertainment as the base of operations, but not filmy songs. Gurgaon ki Awaaz has an excellent range of Haryanvi raginis. Not just locals and labourers, but also people working in offices call up with requests.

Community radio stations are monitored for their content. The CRS' have to follow the programme and advertisement code under the Cable TV (Networks) Regulation Act. They have to maintain a log of 90-days-programmes at any given point of time in the form of a CD, which the ministry can call for whenever it wants.

Whenever the ministry gets a complaint, it can ask the Broadcast Engineering Consultants India Ltd. (BECIL) a PSU under the ministry, to monitor the station for misuse.

Now a days, the mobile revolution had bolstered the number of listeners. Now villagers and migrants workers are listening to the programme on their mobiles, and all are connected to the voice of the community (community radio).

However, the telecom minstry needs to be more proactive, show commitment" in CRS and invest in the social initiative.