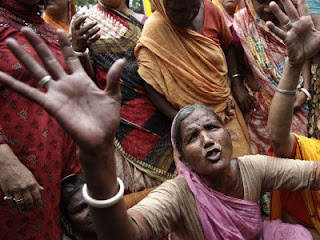 Out of funds worth Rs.1,901.56 crore earmarked exclusively for the welfare of Scheduled Castes, the Delhi government diverted Rs.1,703.93 crore for schemes under the Commonwealth Games, transportation and other projects in 2010-11, citing the official data, an NGO (NCDHR) reveals.

Delhi Chief Minister Sheila Dikshit denied the charges that the funds meant for the scheduled castes community were diverted for other schemes. But the NGO alleged that the Delhi government used the fund "illegally".

The alleged diversion has been made from central government's Schedule Caste Sub-Plan (SCSP), the guidelines of which mention that states have to allocate a certain amount for SCSP in their budget every year.

"In the 2010-11, Delhi government allocated Rs.1,901.56 crore under the SCSP but it spent only Rs.197.63 crore and rest of the money was diverted for projects which don't directly benefit scheduled castes in the capital," National Campaign for Dalit Human Rights' convenor Paul Divakar told.

The capital-based NGO, working for the welfare of scheduled castes, claims to have abstracted the data from the Schedule Caste Sub-Plan Draft Annual Plan 2010-11 and Detailed Demand for Grants 2012-13 of Delhi government.

The Schedule Caste Sub-Plan Draft Annual Plan 2010-11 was prepared Department for the Welfare of SC/ST/OBC/Minorities of Delhi government.
"The fund is meant exclusively for Scheduled Castes and the diversion is illegal as the infrastructure on which money has been spent is for general people and not exclusively for them," said Divakar.

The data available shows that a whopping Rs.233 crore and Rs.181 crore were spent for city transportation and "new schemes" under mega games in 2010 respectively.

The fund - Rs 1,703.93 - was given for various projects under indivisible funds (which cannot be divided) funds but according to SCSP implementation guidelines there should be no division of the total Plan outlay into so-called divisible and non-divisible areas.

"There is no diversion of fund as a footbridge or roads built from that fund is being used by the people belonging to scheduled castes also," Dikshit told.
.
The data provided by the organisation suggests over Rs 400 crore was spent in health sector including various hospitals "which don't cater to scheduled castes exclusively".

While Delhi Minister of Welfare of Scheduled Castes, Scheduled Tribes and Other Backward Castes Raj Kumar Chauhan, said: "We cannot spend all the money on scholarships for scheduled caste students. The roads built from that fund are also being used by scheduled castes. However, we will check."

However, Rs.165.19 crore was diverted for sanitation and water supply, Rs.161 crore was used for education.

As per the data, fund has also been spent on housing, urban development, sectors like employment and labour, which the NGO claimed are not exclusively for scheduled castes.

"If this is the case then it is illegal as the fund under SCSP cannot be diverted. They have to be used only for special programmes for scheduled castes," T. Theethan joint secretary, National Commission for Scheduled Castes under Ministry of Social Justice and Empowerment, told.