Pluses, minuses of UPA-II government:Not much to Celebrate! 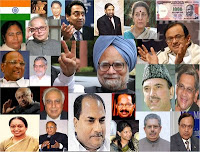 There have been some positives. In the last three years, there have been no big terror incidents, relations with Pakistan have looked ahead and foodgrain production has touched a record 250 million tonnes.

But those have been the very thin silver lining in the proverbial black cloud of corruption, government inaction and unending economic woes with the common person forced to cut back on essentials as prices rise steeply.

Achievements and failures of UPA-11 in the last three years since it was returned to power in May 2009 are as under:

4. Terrorism: Incidents few and far between.

5. Indian Army chief's age: General V.K. Singh sues his own government over his birth date row. Other controversies regarding his letter to Prime Minister Manmohan Singh on lack of defence preparedness, and reports of troops mobilistation towards Delhi do no good to government's image.