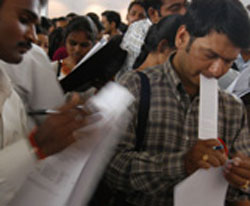 Almost 31 per cent of Indian adults comprising 240 million people say they are "suffering" because of poor quality of life, according to a Gallup survey, though the country had a high growth rate of 6.9 per cent.

The gap between the haves and have-nots may actually be widening, the survey said, releasing the results of its recent opinion poll in which nearly three-fourths or 73 per cent of the respondents perceived corruption as being widespread in the government.

The polling firms' research categorised Indian respondents into three blocs "thriving," "struggling," and "suffering," according to how they rate their present and future lives.

The poll indicates that the poorest and and least educated are the ones who have considered themselves as belonging to the suffering class.

"The key factors affecting Indian citizens' well being are income, education and employment- all linked and influenced by the work place," Gallup chairman and CEO Jim Clifton said.

Research reveals that Indians considered a 'good job' as being employed full time for an employer and in early 2012, 43 per cent of Indians had these good jobs.

Some of the increase in suffering between 2011 and early 2012, it said, may be attributable to the timing of the 2012 survey, which was conducted before harvest time in parts of India, when many farmers likely had gone without pay for several months.

However, that so many Indians rate their lives so poorly may seem inconsistent with the country's high levels of economic growth and its rising-star status in the global economy.

The survey was based on interviews with about 5,000 Indians, age 15 or older, between January 29 and March 8. Its error margin was 1.7 percentage points.
Reactions: