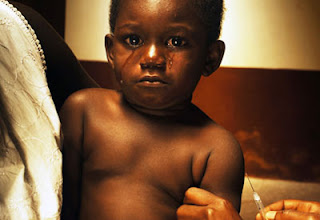 Pneumonia is one of the leading killers of children in India with as many as 3,70,000 children under five falling prey to it every year, making India the country with highest number of deaths due to the ailment in the world, according to a study.

A recent report from John Hopkins University says the disease also affects another 6 million children every year in the country, leading to debilitating, life long complications.

"Globally, the disease claims the lives of 1.4 million children under five every year. That's almost one every 20 seconds - more than AIDS, malaria, and tuberculosis combined," according to Dr Sushma Malik, incharge of Neonatology, at the Nair Hospital in Mumbai.

What is worse is that approximately one in ten Indian children suspected of suffering from pneumonia are administered antibiotics and close to a third are never taken to a health facility.

"The World Immunisation Week, being observed during April 21-28 is a grim reminder of an ignored fact that pneumonia claims the life of a child every 20 seconds," she said.

What makes the situation more tragic is that the disease is largely preventable through the adoption of a few simple interventions (e.G. Ensuring exclusive breastfeeding for six months and complementary feeds thereafter) and through access to widely available vaccines.

Praveen Nair, head of the Salaam Balak Trust, an organisation with substantial operations in Mumbai and Delhi that works for the uplift of poor and abandoned children said, "it is a pity that in a country like ours' innocent children are dying everyday of a disease that is preventable.

The government should be lauded for introducing the vaccine for pneumonia in Tamil Nadu and Kerala but what about the other states of the country where the poor are suffering?"
Reactions: