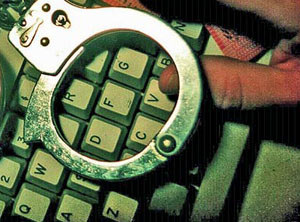 Maharashtra and Karnataka topped the list of cyber crimes registered in 2010 with 246 cases and 176 cases respectively, Communications and IT Minister Kapil Sibal said."With the increase in the proliferation of Information Technology and related services, there is a rise in number of cyber crimes and cyber security incidents. The trend in increase in cyber incidents is similar to that worldwide," Sibal had said in a written reply to the Lok Sabha.Maharashtra recorded the highest number of cyber crime cases at 104 under IPC (Indian Penal Code) in 2010 and had registered 142 cases under the IT Act in the same year, putting the combined cybercrime count at 246.Similarly, under the IT Act, Karnataka in 2010 had the highest incidents of 153 cyber crime cases while it had 23 cases in the same year registered under IPC - taking its total tally to 176 cases.Across the country, a total 966 cases of cyber crime reported under Information Technology Act, 2000 in 2010, Sibal said.As per data maintained by National Crime Records Bureau, a total of 288, 420 and 966 cyber crime cases were registered under the Information Technology Act, 2000 during 2008, 2009 and 2010, respectively, thereby showing an increasing trend, he added.Under the Indian Penal Code (IPC), a total of 176, 276 and356 cyber crimes were reported during 2008, 2009 and 2010, respectively.The minister said the government has put in place a monitoring mechanism to detect such cases."The Indian Computer Emergency Response Team (CERT-In) scans the Indian cyber space to detect traces of untoward incidents that poses a threat to the cyber space purely from technical point of view," he said.CERT-In provides mechanisms to detect cyber frauds and cyber crimes like phishing, spamming, pharming and detection of 'BOTS' which are used in cyber frauds and cyber crimes.CERT-In and Centre for Development of Advanced Computing (C-DAC) are involved in providing basic and advanced training to law enforcement agencies, forensics labs and judiciary on the procedures on the methodology of collecting, analysing and presenting digital evidence, he said."Cyber forensic training lab has been set up at Training Academy of Central Bureau of Investigation (CBI) to impart basic and advanced training in cyber forensics and investigation of cyber crimes to police officers associated with CBI," Sibal said.In addition, the government has also set up such labs in Kerala, Assam, Mizoram, Nagaland, Arunachal Pradesh, Tripura, Meghalaya, Manipur and Jammu and Kashmir, Sibal said.
Reactions: