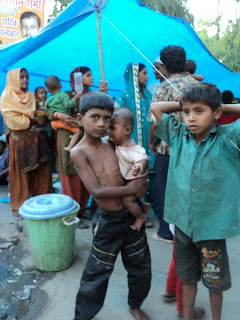 Despite the recent steps towards democracy in Burma (Myanmar), little has changed for many ethnic minorities in the country. Burmese democracy leader Suu Kyi may be rewarded for the steps she had taken towards democracy and overwhelmed by the current progress, but this is not enough assurance for her exiled colleagues in India to think of returning to Burma. In New Delhi, large numbers of asylum seekers are finding it hard to find support and help from the responsible agency.

At the doorstep of UNHCR office in Vasant Vihar of New Delhi, making pavements as their homes, over 500 Myanmar nationals from northern Rakhine State, including women and children, have camped for more than the past two weeks demanding refugee cards to avail facilities that a refugee would get for better living conditions, like water to drink and toilets. The asylum seekers in New Delhi have traveled a hard road in their pursuit of legal recognition.

The agency responsible for assisting these asylum-seekers has not made their lives any easier. "The road for a refugee is only as long as you make it," reads a poster hanging in the lobby of the United Nations High Commissioner for Refugees (UNHCR) office in New Delhi. Outside, over 500 asylum seekers from Burma are silentlyb protesting near the office building, pleading for recognition as a refugee, and for a simple piece of paper confirming their status as a "person of concern", which would allow them to stay legally in India. Nearly half of the demonstrators say that their asylum applications have already been rejected by the UNHCR for unknown reasons.

In limbo since April 9, Naseema, Zanu and over 500 people like them belonging to Burmese Rohingya community hounded out from Burma, have made temporary sheds of polythene sheets by the rear compound wall of the UNHCR office in B-2 Block of Vasant Vihar in south Delhi, demanding refugee cards.

"Some of us issued a asylum seeker card by the UNHCR, but it deprives us from lot of facilities that a refugee would get. We want a refugee card. Our children need education, better living conditions like water to drink and toilets. But we are deprived of this as we don't have a refugee card," another Burmese refugee Zia-ur-Rahman asserts.

However, the UNHCR officials, Nayana Bose say that they discussed the issue with the refugees several times and there may be some new comers in the group  who have not yet registered with UNHCR.

"We have already registered them as asylum seekers and issued identity cards. The card helps them to prevent from harassment, arbitrary arrests, detention and expulsion," Bose said.
With the help of Association for Community Research and Action, refugee activists, Dr. Fatemeh Attarpour,  Abhishek Kumar and Meraj Ahmed, who was been visiting the refugee camp at UNHCR doorstep has obtained the ground zero reports, which is so far proved as heart wrenching.

"Asylum seekers under the polythene sheds with minimal access to drinking water and without proper facility for toilets specially for ladies, compel us to be ashamed to claim as human being with heart. Their conditions are not less than stray dogs, who atleast have foods at different places, but the asylum seeker depends on mercy of the people near by in the community, an activist from ACRA, " Dr. Fatemeh Attarpour added.

Another activist Abhishek Kumar and Meraj Ahmed, who has been visiting the camp frequently, also said 'the UNHCR recognised them as a asylum seekers from the Burma but unable to provide the basics of facilities of daily life to them.'

On the contrary, Aung Saan Suu Kyi is likely to travel to Norway, where she will collect her Nobel Peace Prize (announced in 1991) and then visit Britain to receive doctrate from Oxford University that was announced way back in 1993.However, no dates have been finalized so far.