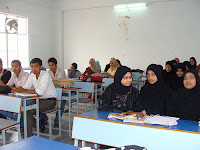 Blaming income barrier for low presence of Muslims in higher education, a study has suggested modernisation and mainstreaming of madrassas because they have been found to play a positive role in helping students from the community attain higher education.