Issue of rights of forest dwellers took centrestage in 2011 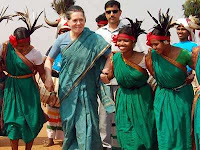 With Naxalism spreading its wings in forest areas and wooing tribals, the issue of rights of forest dwellers took centrestage during 2011 with the government taking several steps to address their grievances.
Attempting to win back the confidence of tribals, the government carried forward measures like distribution of title deeds to tribals and provision of facilities like healthcare, education, marketing of forest products and scholarship for children of forest dwellers.
For strengthening education among ST students, the Tribal Affairs Ministry started a scheme of pre-matric scholarship with a budget of Rs 50 crore for 2011-12. The Cabinet Committee on Economic Affairs (CCEA) approved a 100 per cent centrally-sponsored scheme for providing financial assistance to the students pursuing post matriculation courses through recognised institutions.
For implementation of Scheduled Tribes and Other Traditional Forest Dwellers (Recognition of Forest Rights) Act 2006, a joint committee was set by Tribal Affairs and Forest and Environment Ministry last year.
The committee besides taking measures for conservation and development of tribal population and their culture, would also look at regular interaction between the two ministries for implementation of the act.
The year also saw the Tribal Affairs Ministry targeting forest department officials for low rate of settlement of community rights in the jungles.
The Rajya Sabha passed a Bill to give ST status to six tribes in Manipur and Arunachal Pradesh amid demands to bring a national comprehensive law to cover all tribes in various states.
But the year ended on a negative note for the Ministry, with a Parliament Committee pulling up the government over large scale rejection of forest dwellers' title deed claims by several state governments.
Observing that the rejections might have occurred due to procedural reasons such as non-fulfilment claims forms properly and non-furnishing of relevant documents, the panel asked the government to review these cases on basis of their merit.
On declaration of critical wildlife habitats, the panel criticised the government for declaring any such habitat till date, which has given undue advantage to the forest department for forceful eviction and harassment of tribes in the name of protected areas.
The committee also asked the ministry to keep a vigil over harassment of innocent tribes in the name of protected zone and intervene wherever necessary so that forest dwellers are not displaced and troubled unnecessarily.
It recommended that the states should be guided for cooperative societies for procuring and marketing of Minor Forest Produce (MFP) on the lines of those already existing in some state.
Taking over charge as Tribals Affairs Minister in July, V Kishore Chandra Dev said he will strive for the timely and efficient implementation of government schemes along with the grant of land rights to the tribal people.
Reactions: