'Delhi perceived to be the most unsafe for women' 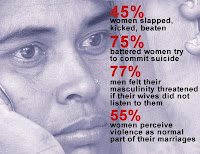 The study conducted by Navteq, global provider of navigation enabled maps, and TNS Market Research claims 87 per cent women regarded Delhi as most unsafe city while Mumbai was touted as the safest city by 74 per cent women.
While women in Kolkata felt safer than those in Delhi and Mumbai, most women in Chennai felt their city was safer than Delhi but not as safe as Mumbai.

The study also claimed that to find their way, most women prefered to seek direction from friends and family before setting out while en-route in unfamiliar areas, a similar number will seek directions from strangers with an aim to overcome the fear of losing their way.

The survey carried out across the four metro cities comprised of 760 respondents.
Reactions: