'Corruption most talked-about issue in India' 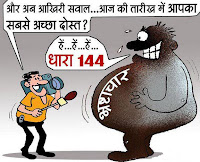 Corruption has emerged as the most frequently discussed issue in India while unemployment is the world's fastest-rising fear, according to a survey by the BBC covering 11,000 people in 23 countries.
Corruption ranked the most talked-about subject in the annual poll globally, called The World Speaks, by BBC World Service, with nearly a quarter of the respondents discussing that topic over the past four weeks.

Apart from India, graft was the most talked-about issue in other developing nations like Nigeria, Indonesia, and Peru, the survey has revealed.
Next came extreme poverty. One in five had talked about that subject recently across the world.

However, unemployment was mentioned by 18 per cent -- six times the rate citing it in the first survey in 2009, though concerns about joblessness varied by country.

Top of the list was Spain, where 54 per cent of those sampled said they had discussed unemployment recently, an increase of one-third on the previous year's BBC poll.

Ghana, Mexico, Nigeria and Turkey were among the other countries where this topic appeared a particular concern, with a third or more of those sampled saying they had discussed the issue in the month before the survey.

In the US, France and Japan -- all wealthy, developed nations -- the state of the world economy emerged as the main talking point. In another group of developing countries, like China, Russia, Kenya and the Philippines, rising prices for food and energy were the main topic.

In Latin America, however, crime and violence emerged as commonly discussed themes, according to the survey.

The poll, carried out by Globescan on behalf of BBC, gave people a list of concerns and asked which they had discussed with friends or family in the past month.
Reactions: