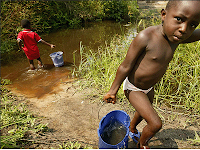 Prosperous countries have not lived up to their promises to help the poor, the UN declared, saying poor people often go hungry because of polluted water, drought and other environmental factors that are increasing poverty.
In its annual report on the quality of life worldwide, the United Nations Development Programme said more should be done to address international environmental concerns and that sustainability must become a way of life as the world population grows above 7 billion.
"Sustainability is not exclusively or even primarily an environmental issue," UNDP Administrator Helen Clark said in the report's introduction.

"It is fundamentally about how we choose to live our lives, with an awareness that everything we do has consequences for the seven billions of us here today, as well as for the billions more who will follow."

The report noted that although aid to poorer countries grew 23 percent from 2005 to 2009, it was not enough.

"Rich countries have consistently failed to meet their stated pledges," including promises made by the G-8, the European Union and the United Nations to give USD 100 billion a year by 2020 to fight the impact of climate change in developing countries.

The UNDP report, published annually since 1990, said high living standards don't need to be carbon-fueled and follow the examples of the richest countries, adding CO2 emissions have been closely linked with national income growth.

Among the 187 nations surveyed, Norway, Australia and the Netherlands topped the annual Human Development Index while Congo, Niger and Burundi were listed last.

The United States was fourth, ahead of New Zealand and Canada, but when the index is adjusted for internal inequalities in health, education and income, some of the wealthiest nations drop out of the UNDP's top 20, the report showed.