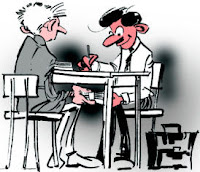 When it comes to companies bribing public officials when doing business overseas, India's score has improved the most in a global index, rights group Transparency International said.
Nevertheless, India continues to be ranked near the bottom of the global Bribe Payers Index, as there was a high likelihood of Indian companies paying bribes abroad.
In a list of 28 countries, India has been ranked 19th, while China and Russia were fared the worst, at 27th and 28th positions, respectively.

The index was based on a survey of 3,000 business executives from developed and developing countries, the anti- corruption group said in a report.

The countries were evaluated on a scale of 0-10 points, with the maximum 10 points corresponding to the view that companies from that country never indulged in bribery abroad and a zero score being equivalent to these companies having always paid bribes.

This was the maximum improvement for any country, but India "still remains near the bottom of the table," Transparency International said.

It added that the leaders of G-20 nations, during their meeting at Cannes, were expected to recognise the steps taken by countries like India to tackle foreign bribery.

India's score was below the global average of 7.8 points.

In this year's list, the Netherlands and Switzerland have been ranked together on top with 8.8 points each -- indicating that companies from these countries were the least likely to pay a bribe while doing business abroad.

On the other hand, Russia was ranked the worst, with a score of 6.1 points, while China was a notch higher at 27th position, with 6.5 points.

Those ranked below India include Turkey, Saudi Arabia, Argentina, the UAE, Indonesia and Mexico.

On the top of the list, the Netherlands and Switzerland were followed by Belgium, Germany, Japan, Australia, Canada, Singapore, the UK and the US.

Canada and the United Kingdom saw the most significant deterioration in their scores and their country rankings fell by five and three places, respectively.

Canada and Belgium were together ranked at the top of the previous list in 2008.

The 2008 survey comprised 22 countries and ranked India at 19th place with a score 6.8 points.

Transparency International said that addressing foreign bribery was a priority issue for the international community and urged the leaders of G-20 nations to tackle the issue as a matter of urgency.

The group of 20 leading economies (G-20) last year had committed to tackling foreign bribery by launching an anti-corruption action plan.

"The progress report of the working group monitoring the action plan, which G-20 leaders are expected to approve at tomorrow's Cannes summit, will recognise steps taken by G-20 countries China, Russia, Indonesia and India in criminalising foreign bribery," it said.

Transparency International said that the G20 governments must tackle foreign bribery as a matter of urgency.

"New legislation in G20 countries is an opportunity to provide a fairer, more open global economy that creates the conditions for sustainable recovery and the stability of future growth.

"Governments can press home the advances made by putting resources behind investigations and prosecutions of foreign bribery, so that there is a very real deterrent to unethical and illegal behaviour," said Transparency International Chair, Huguette Labelle.

The survey found that there was a widespread practice of companies paying bribes to public officials in order to win public tenders, avoid regulation, speed up government processes or influence policy.

At the same time, the companies were found to be almost as likely to pay bribes to other business entities too.

"This suggests that corruption is not only a concern for the public sector, but for the business sector as well, carrying major reputational and financial risks for the companies involved," Labelle said.

"It is clear that bribery remains a routine business practice for too many companies and runs throughout their business dealings, not just those with public officials.

"And companies that fail to prevent bribery in their supply chains run the risk of being prosecuted for the actions of employees and business partners," Labelle added.

The survey also ranked 19 specific sectors on the likelihood of their firms to engage in bribery and exert undue influence on governments.

The public works and construction companies scored the lowest, emerging as a sector where bypassed regulations and poor delivery can have disastrous effects on public safety, the rights group said.

The oil and gas also emerged as a major sector prone to bribery, it said, adding that companies operating in oil-rich Nigeria have already been fined upwards of USD 3.2 billion in 2010-2011 for bribery of public officials.

Noting that there has been not much improvement since the last ranking in 2008, Transparency International said that the average global score stands at 7.9 in the latest index, as against 7.8 three years ago.

"An important first step in the fight against foreign bribery is for a government to have an effective anti- corruption system in place at home.

"Governments must set an example to companies by prohibiting corruption within the public sector and upholding high standards of integrity with no impunity," it added.

It further said that the governments needed to step up their anti-bribery efforts, by ratifying key global conventions, providing appropriate resources to probe bribery- related offences, and by "mustering sufficient political will to prosecute corporate bribery."
Reactions: