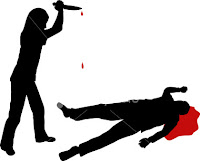 More people are killed by armed violence resulting from crime than are killed in war, with Latin America and a swath of countries through the middle of Africa among the hardest hit, an international study claimed.
About 526,000 people die violently every year or more than 1,400 people every day, according to the 2011 Global Burden of Armed Violence report.
Only about 55,000 of those killed die in warfare, while an estimated 396,000 people are murdered outside of armed conflict. Some 54,000 people die due to unintentional violence, and 21,000 are killed in police operations.

"Most of the states that are worst affected by armed violence are not at war," said Keith Krause of Geneva's Graduate Institute, one of the authors of the report.

Those countries, led by El Salvador, Iraq and Jamaica, have less than 5 per cent of the world's population but account for a quarter of all global violent deaths.

Only six of the 14 countries Iraq, Colombia, Sri Lanka, Central African Republic, Sudan and Congo were active conflict zones during the 2006-2009 period examined.

Even within countries there were big variations. Mexico's Chihuahua state had a violent death rate of 129 per 100,000 inhabitants in 2010, largely due to heavily armed drug gangs competing for territory, while eastern states had relatively low rates.

"This total is greater than almost any war zone that we can find on the planet," said Krause.

Although the vast majority of victims of armed violence are men, at least 66,000 women are killed each year. The more violent a country is, the lower the proportion of women among the victims, the study found.

The figures for countries at war don't include indirect deaths, such as those who die because violence prevents them from reaching hospitals. The authors, based at Geneva's Small Arms Survey, estimate indirect deaths in war at 200,000 each year.
Reactions: