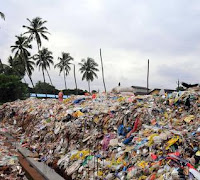 The Comptroller and Auditor General (CAG) has found serious flaws in waste management by urban local bodies in Kerala.
The CAG report for 2009-10, released by Principal Accountant General (A and F) J Mahalkeshmi Menon, pointed out that most of the town bodies did not have any effective system of waste movement and processing.

It also faulted State Pollution Control Board and other agencies concerned for not properly discharging their duties.

The CAG found that the urban civic bodies, which are test-checked, did not maintain any record on quantity and composition of wastes generated to assess the magnitude of the problem.
In most cases, waste collection was much less than the waste generated. The collected wastes were dumped without processing in many places, seriously harming the ecosystem, sources of agriculture.

Since urban local bodies had no reliable information about the quantum of solid waste being generated in the respective areas, the situation made it difficult to make any kind of trend analysis difficult, the report said.

The CAG also made a set of recommendations to improve the situation including steps for waste reduction and recycling rather than waste disposal.

The report was also tabled in the Kerala Assembly.
Reactions: