'Need to empower women for an equitable society' 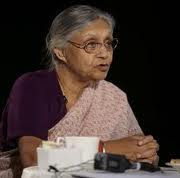 Delhi Chief Minister Sheila Dikshit underlined the need to empower women by imparting skills to them for building an "equitable society" where everyone's voice is heard.
She highlighted the importance of women getting equal access to opportunities and better representation in governance across the globe.

"A woman wants equality, she wants to be able to access whatever her brother, or father has been able to access. But to give her a sense of equality and capability, they need to have an access to education and health," Dikshit said addressing an international conference on 'Gender Equity and Exclusion in South Asia: Emerging Challenges at the Jamia Millia Islamia University.
Admitting that Delhi has an "awful system of imbalanced gender," Dikshit said the state government launched 'Ladli Scheme' and established Gender Resource Centres, where various vocational works are imparted to women to give them a sense of confidence and belief that they too can stand on their own feet and that they do not need to depend on others.

"These were small initiatives and the government needs to take bigger ones...But the love, affection and understanding that a woman can give should not be lost in the process," she said.

She also sought to know how policies can be made when "45 per cent of the world's population doesn't have any say in matters of governance."

Dikshit said there was an urgent need to give women a sense of "great security" and the "freedom from fear of violence" whether it was at home or outside.

Dikshit said discrimination between men and women exists in every part of the world in varying degrees.

In Australia, she said, the difference between male and female may be less than what perhaps it is in Sri Lanka but it is there.

"They (women) feel exactly the same in Europe, or in America that we are considered less capable, important and intelliigent," she said.

She quoted a United Nations study, according to which, 75 per cent of the work people do for which they don't get paid like raising children, looking after aged parents, looking after farm land, family, animals, and tilling the lands is being done by the women.

And yet, according to the same study, the women have access or hereditary rights to only .5 per cent of the world's total assets, she said.

Dikshit said this feeling of exclusion and discrimination basically emanates from people's psychology.

"People realise little that medically it has also been proved that a woman is stronger than a man and that a woman is physically more strong and her body has got more resilience and resistance than the male figure does," she said.

She said so long as there is discrimination against women and a woman is not allowed to explore her full potential, it is impossible to create an equitable society.
Reactions: