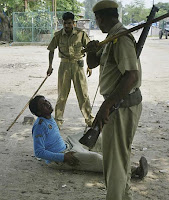 Uttar Pradesh and Gujarat have topped the list of states which were asked to pay compensation to victims of human rights violation in the past three years, accounting for 57 per cent of the Rs 30.48 crore recommended by the National Human Rights Commission (NHRC).
According to NHRC documents, Goa ranks at the bottom of this list along with Arunachal Pradesh, Puducherry, Andaman and Nicobar Islands and Chandigarh.

"There is an increase in the recommendation of compensation in the past three years. We have also increased the compensation component in several cases like the rise to Rs five lakh in custodial death cases from Rs one lakh," a top NHRC official said.

The documents said UP was asked to pay a compensation of Rs 9.5 crore in 614 cases, both the highest in the country, while Gujarat which came second in the list were to pay Rs 7.8 crore in 44 cases.

Bihar and Andhra Pradesh followed these states in the list with Rs 1.6 crore (102 cases) and Rs 1.3 crore (65 cases) respectively.

Himachal Pradesh, which does not have a functional state human rights body, was not asked to pay any compensation last year though in the previous two fiscals it had to shell out Rs six lakh compensation in two cases.

The north-eastern state of Nagaland is the only state which has not been asked to pay any compensation in the past three fiscals. Among Union territories, Andaman and Nicobar, Dadar and Nagar Haveli and Lakshadweep share this honour.
Reactions: