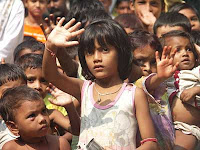 A high percentage of intestinal worms has been found among children living in slums and those in Municipal Corporation of Delhi (MCD)-run schools, according to a survey.

Soil-transmitted helminths, commonly known as intestinal worms, are the most common infections worldwide affecting the most deprived communities.

Worm infestations lead to a chronic condition that harms health, nutrition and development of children.

An 18.86 percent of MCD-run school children were found to have helminths. Slum children infested with the parasite were 18.79 percent, while 9.91 percent children of Delhi government schools were found to be carrying worms.

The highest prevalence of this worm was found in northeast Delhi at 26.7 percent, while 25.4 percent children of central Delhi were infested with it, said the study.

"In India, the burden of disease caused by soil-transmitted helminths is enormous. Although these helminths can infest all members of a population, the most vulnerable groups are pre-children, adolescent girls, and women of childbearing age and school-age," stated the study.

Globally, over 400 million school-age children are estimated to be at high-risk for parasitic worm infestations.

"Despite the extent of this problem, and its serious detrimental impact on children, parasitic worm infestations have been an extremely neglected problem," says the study.

It was based on a heterogeneous sample of 3,251 children from 40 Delhi government schools. A total of 40 MCD schools with a sample size of 1,108 and 48 slums across Delhi participated.
Reactions: