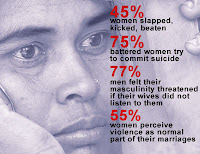 Over 35 per cent of all women and 40 per cent of married women experienced physical or sexual forms of violence and the figures were higher in rural areas, the Lok Sabha was informed.

"The National Family Health Survey III (2005-06) data shows that in the 15-49 age group, 35.4 per cent of all women and 40 per cent of married women experienced physical or sexual violence," Women and Child Development Minister Krishna Tirath said during Question Hour.

She said 6.7 per cent experienced both physical and sexual forms of domestic violence.

Tirath said the data suggests that both physical and sexual forms of domestic violence against women are higher in rural areas as compared to the urban areas.

She claimed that Protection Officers (POs) had been appointed in every state except Jammu and Kashmir (where the Act is not applicable) and her ministry held regular meetings with state governments to ensure that this system was functioning efficiently.

The Domestic Violence Act, 2005 is implemented by states and Union territories.

"Under the Act, state governments are required to appoint Protection Officers in each district as they may consider necessary," she said.