'No higher subsidy on old stock of P&K fertilisers' 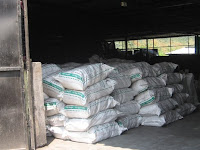 In a major blow to the fertiliser industry, the government has decided not to pay a higher subsidy to companies on old stock of finished phosphatic and potassic (P&K) fertilisers and raw materials this year.
While the development will help the government reduce its fertiliser subsidy bill by Rs 500 crore, the decision is expected to prevent private players from reaping windfall gains and also from entering into long-term contracts for imports.

"It has been decided to make payment to the manufacturers/importers on the carried over quantity of P&K fertiliser, including SSP and various raw materials for P&K, as on March 31, 2011, as per the NBS rates that prevailed in January-March, 2011," a circular issued by the Fertiliser Ministry said.

The carry-over stocks of raw materials and finished P&K fertilisers held as on April 1, 2011, were purchased by companies at lower rates in the 2010-11 fiscal and hence, the subsidy will be paid at the rates set for last year, it said.

The NBS rate fixed for last fiscal is, however, 24 per cent lower in comparison to the subsidy of Rs 5,559-19,763 per tonne set for the current fiscal.

As of April, 2011, the companies have an estimated carry-over stock of 9.39 lakh tonnes of fertilisers, with the maximum being muriate of potash (MoP). They also have huge old stocks of imported raw materials.

The ministry, which has asked the companies to provide details of the old stock, is expected to reduce its subsidy burden by Rs 500 crore in the current fiscal as a result of this major decision.

The fertiliser industry is, however, upset over the development. "It will affect the industry. There is always high and low cost stock and companies should be allow to manage it," Fertiliser Association of India Director General Satish Chander said.

Experts said the new norm on fertilisers companies could affect the supply of the key farm nutrients in the country, as companies may not opt for imports to meet the long-term demand, fearing they may not get adequate subsidy.
Reactions: