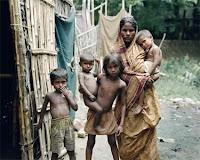 As many as 320 million people in India and China are expected to come out of extreme poverty in the next four years, while India's poverty rate is projected to drop to 22 per cent, says a UN report.
The UN Millennium Development Goals Report, however, suggested that even though progress has been made in reducing poverty, Southern Asia continues to lag in terms of nutrition, sanitation and gender equality.

Those living on less than USD 1.25 a day are considered poor.

"If India does not meet Millennium Development Goals (MDGs), the world will not...," she noted.

According to the report, China and India combined, the number of people living in extreme poverty between 1990 and 2005 declined by about 455 million, and additional 320 million people are expected to come out poverty by 2015.

By 2015, it is expected that global poverty rate will fall below 15 per cent, well under 23 per cent target.

Noting that most vulnerable sections of the society were being left out, the report said that the poorest children have made the least progress towards improved nutrition.

Releasing the report in New Delhi today, noted economist Jayati Ghosh said that India can achieve MDG goals provided there is political will and a new strategy for policies.

"There is also a requirement to rapidly expand our public investment for achieving MDG goals," she said.

Regarding employment scenario, the report noted that economic recovery has not created enough job opportunities, especially in Southern Asia.

"The recent data by NSS (National Sample Survey) has substantiated this point that economic recovery did not cover employment. While output has recovered, employment has not...," Ghosh said.

"Real progress has been made but by bypassing the most poor and vulnerable groups... Poverty reduction does not get translated into hunger reduction," Tamamura said.
Reactions: