12.5% shortfall in fertiliser availability in July 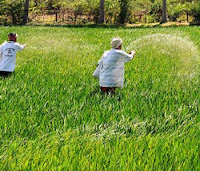 The availability of key fertilisers such as DAP for the current month is 12.5 per cent lower than the projected demand, at 56 lakh tonnes, adding to the farmers' woes in the ongoing kharif season.

Presently, sowing of kharif (summer) crops such as paddy, coarse cereals and pulses is underway. Fertilisers are necessary for ensuring crop yields and the shortage in supply could put a damper on hopes of achieving bumper production this year.

The Fertiliser Ministry has assessed the total requirement of farm nutrients for the month of July at 64 lakh tonnes, while availability has been estimated at 56 lakh tonnes only, after taking into account imports and domestic output.

While there is no supply crunch for urea fertilisers, the shortage of phosphatic nutrients, especially DAP, could affect farmers in northern states like Punjab and Haryana, who are heavily dependent on this fertiliser.

The availability of di-ammonium phosphate (DAP) is only 12 lakh tonnes for the current month, though demand is estimated at nearly 16 lakh tonnes, as per official data.

The availability of other phosphatic fertilisers is sufficient to meet the country's requirement.India depends on imports for DAP. However, due to high global prices, imports have slowed down even as the government has increased the import subsidy substantially. The ministry expects eight lakh tonnes of imported DAP to be available for domestic consumption in July.

Besides DAP, there is an acute shortage of Muriate of Potash, which is widely used in horticultural crops, with the requirement pegged at 4.58 lakh tonnes for July.

A senior ministry official said that farmers need not worry about the supply of urea as the availability is estimated at 33.76 lakh tonnes in July, against demand of 33.54 lakh tonnes in the same month.

The Agriculture Ministry aims to achieve a record 245 million tonnes of foodgrains production in the 2011-12 crop year.