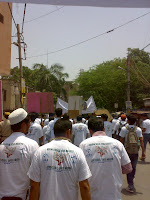 India, one of the world's fastest growing economies, is trying to become a green economy, according to new poll that showed Indians narrowly prioritise environmental protection over economic growth.

Bulk of the population, those who are getting by on their present incomes or finding it difficult to get by, remain more focused on the environment than the economy, said the leading US public opinion agency, Gallup in its new poll.

"Indians living comfortably -- and less likely to worry about putting food on their tables -- are equally divided," it said.

Thirty-nine percent of Indians who say they are finding it very difficult to get by on their household incomes prioritise the economy, while 29 percent favour the environment and many (23 per cent) don't have an opinion, it said in a statement.

India is "at the forefront of some of the 'green shoots' of a Green Economy that are emerging across the globe," UN Undersecretary-General and UN Environment Program (UNEP) Director Achim Steiner, said when the UNEP announced India's selection as the global host for World Environment Day this year (June 5).


For "GO GREEN" CAMPAIGN Photo, COPY and OPEN the Link below: