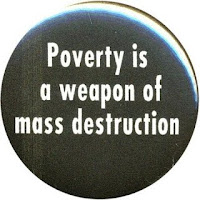 Soaring food and oil prices could keep an additional 42 million people in poverty in the Asia Pacific region and threaten economic growth, the United Nations said.
As regional economies continue to pick up pace in the wake of the global downturn, they face renewed fears about the impacts of higher oil costs, the UN Economic and Social Commission for Asia and the Pacific (UNESCAP) said.

In its Economic and Social Survey of Asia and the Pacific, the UN agency said higher crude prices could wipe up to one per cent off growth in the energy-hungry region.
"As soon as you recover from the financial crisis you have the oil and food crisis again," said Nagesh Kumar, director of the UNESCAP macroeconomic policy and development division.

UNESCAP said if crude prices rose to an average of USD 130 dollars a barrel and food prices doubled this year -- a worst case scenario -- then an extra 42 million people would either fall into, or fail to climb out of, poverty.

New York's main oil contract, light sweet crude for delivery in June, was priced at about USD 109 a barrel in Asian trade on today.

"Rising food prices are having dire effects on the poor, and reversing development gains," said the report, which puts the total number of people living on less than USD 1.25 a day in the region at more than 950 million.

The impact of the higher costs would be more severe in rural areas where the majority of poor people live, like India, Laos, Bangladesh and Nepal.

The report said heightened speculation in food commodities as well as poor harvests and increasing conversion of crops to biofuels had driven food prices as much as 35 per cent higher in some countries.

"The rising prices are not going to the producers," Kumar said. "Speculators are making up most of price rises and this is a very disturbing trend."

Countries around the region have suffered from surging inflation in recent months, driven by higher oil prices and a flood of foreign funds attracted to economies' high growth and rising interest rates.

Kumar said there was always potential for unrest when food prices escalate, but added there were signs that governments in the region were acting to reduce the cost of staples and step up social protection.

"If you have a situation where nobody is bothered about prices then obviously those affected will not keep quiet," he said.

The large inflows of capital to the region create "vulnerability" to a sudden reversal.
Reactions: