With increase of over 3 cr people, UP remains most populous 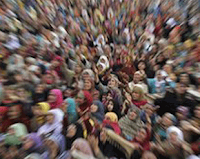 With an increase of 3.3 crore in its population in the last decade, Uttar Pradesh continues to be the most populous state in the country, with the number of its people more than that in Brazil, according to census 2011.
However, there has been a decline of 5.76 per cent in the growth rate of population in the state in comparison to the previous decade's growth rate.

From 16.61 crore in 2001, the state's population has increased to 19.95 crore in 2011 at a rate of 20.09 per cent as against 25.85 per cent growth rate in the previous decade.
"As per the provisional count, the population of UP is about one-sixth (16.5 per cent) of total population of India and has increased by more than 3.3 crore," director of Census Operations UP Neena Sharma told.

She said UP continues to be the most populous state in the country, with a population more than that of Brazil.

While the growth rate of male population in this age group is minus 5.18 per cent, it is minus 6.88 per cent in the case of females.

Among cities, Lucknow continues to be the most populous with a total population of 28.15 lakh followed by Kanpur at 27.69 lakh.

Despite the increase in population, the percentage decadal growth rates of the most populous districts, including Allahabad, Moradabad, Ghaziabad, Azamgarh and Lucknow have declined during 2001-2011 as compared to 1991-2001.

As per the provisional count, the overall sex ratio of the state has increased by 10 points from 898 in 2001 to 908 in the last decade.

Jaunpur, reporting 1018 female as against 1000 males, has the highest sex ratio, which it the lowest in Gautam Buddha Nagar and Kanpur at 852.

An increasing trend in the child sex ratio in this age group has been witnessed in Hardoi, Ballia, Siddharth Nagar, Kushinagar, Bijnor and Sonbhadra.

The lowest literacy rate for males and females works out to be 59.55 per cent and 37.07 per cent respectively in Shravasti district.

Ghaziabad has the highest population density of 3,954 persons, followed by 2,399 in Varanasi, whereas Lalitpur has the lowest density rate of 242 persons.
Reactions: