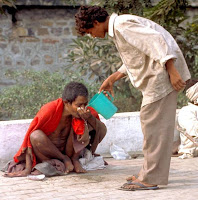 India's poverty is estimated to have declined to 32 per cent in 2009-10 from 37.2 per cent five years ago, as per preliminary findings of the Planning Commission.
The estimates are based on the formula suggested by the Tendulkar Committee for computing the number of poor in the country.

"2009-10 data show a decline in poverty from 37.2 per cent in 2004-05 to 32 per cent in 2009-10 as the per the preliminary data worked out the (Plan panel member) Abhijit Sen," Planning Commission Deputy Chairman Montek Singh Ahluwalia told reporters.

Tendulkar Committee had suggested that poverty should be estimated on the basis on consumption based on cost of living index instead of caloric intake. It said that the basket of goods should also include services like health and education.
The new poverty line, as suggested by the Tendulkar Committee, is different for rich and poor states and also different for rural and urban areas within a state.

He added that the National Sample Survey, which conducts large sample surveys every five years, will launch its next round in 2011-12.

"When the second sample survey (for 2011-12) becomes available by 2013 then we will really know whether the effort to make the 11th Plan more inclusive have been successful or not," Ahluwalia said.

Speaking on the issue, Minister of State for Planning Ashwini Kumar said, "This, of course, is in the process of being reviewed. Once we have the exact figures of 2009-10 we will be able to know whether poverty estimates have come down and what is the exact position".

He said the Tendulkar Committee has applied a particular methodology, which had been accepted by the Planning Commission.

"There is a lot of confusion in everybody's mind about what are the yardsticks, what is the committee that has an accurate estimate of poverty index," Kumar added.

Estimates of poverty are important because the cheap grains under proposed Food Security law will be provided based on these numbers.
Reactions: