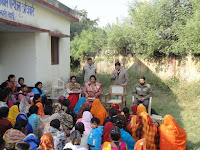 Plagued by numerous problems such as lack of infrastructure, Anganwadi centres (AWC) are considered "useless" by residents of Delhi, according to a survey.
The survey was conducted across seven districts of Delhi, eaching having one AWC responsible for mother and child care.

"There is lack of infrastructure, wages are low, there is unavailability of space for children to play and educational facilities are also missing," survey said.
"For informal sector workers who have irregular incomes that fall below minimum wages, a working Anganwadi can be a lifesaver," survey revealed.

The most damaging effects of under-nutrition occur during pregnancy and the first two years of a child's life. This is a leading factor behind India's high infant mortality and morbidity rates.

However, Survey said, "If government does timely investment in terms of resources, staff and planning, these child deaths and diseases are entirely preventable."
Reactions: