Women's participation in politics: India ranks 98 in the world 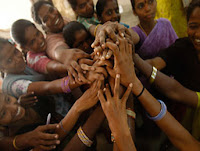 On the occasion of International Women's Day, statistics reveal that India lags behind many countries, including its neighbours Pakistan and Nepal, when it comes to women's participation in politics.
With only 10.8 per cent of women representation in the Lok Sabha and 10.3 per cent in the Rajya Sabha, India ranks 98 in the world, according to the data released by the Inter-Parliamentary Union (IPU), an international group that works for promoting democracy, peace and co-operation in the world.
India, the world's largest democracy, has now only 59 women representatives out of 545 members in Lok Sabha, while there are 25 female MPs in the 242-member Rajya Sabha.

While India shares its position with Benin and Jordan, it is ranked 47 places below Pakistan and 80 places behind Nepal.

With 22.2 per cent women MPs in its Lower House and 17 per cent in the Upper House, Pakistan is placed 51 while Nepal is ranked 18, with 33.3 per cent of female MPs in its parliament, according to the IPU list released on January 31 this year.

Similarly China and Bangladesh also have a much higher representation of women in national politics compared to India.

While the communist country is placed at 55 in the list, with 21.3 per cent women representation, Bangladesh is ranked 65th, with 18.6 per cent female participation in national politics, the data revealed.

Sri Lanka and Myanmar are the only neighbours which are placed above 100 in the list.

Following its elections last April, Sri Lanka is ranked 122 with only 12 female members, or 5.3 per cent, in the 225-seat National Assembly.

Myanmar, which allowed general elections last year after decades of military rule, is raked 124 with only 14, or 4.3 per cent of female MPs in the 168-seat parliament.

Among the countries with highest women participation in national politics, Rwanda ranks number one in the world with over 56 per cent women members in the Lower House and over 34 per cent in the Upper House.

With 157 women MPs or 45 per cent, in its national legislature, Sweden ranks two in the list while South Africa comes third with 44.5 per cent women MPs in its Lower House.

Mozambique and Angola are placed at position nine and ten with over 38 per cent women participation in politics.

Countries like Germany, Italy, Britain, France and the US are ranked 19th, 53rd, 62nd, 63rd and 72nd respectively.

There are 12 countries, including Saudi Arabia, Qatar and Oman, which have zero women representation in their national assemblies, the report reveals.
Reactions: