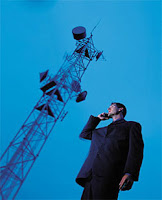 Telecommmunications, under limelight in recent months due to the 2G scam, has been voted as the second most corruption-prone sector in India after real estate and construction, according to a survey by KPMG.
The survey, covering corporate India, also found that a huge majority of corporates believe India can surpass an annual growth rate of over 9 per cent if corruption is controlled, while self-critically admitting that private sector is greatly responsible for bribery and nepotism.

The survey is based on responses from 100 Indian and multi-national corporations operating in the country in diverse areas, including transportation and logistics, aviation, oil and gas, consumer goods, financial services, auto and chemicals.
As per the final results, 32 per cent of the respondents named real estate and construction sector as most prone to corruption. In second place came telecommunications, which was named by 17 per cent respondents as the most corruption prone sector in India.

The telecom sector has been in spotlight due to the 2G scam in which many top industry players have been embroiled.

Among others in the KPMG survey, development sectors such as education and poverty alleviation came third with 13 per cent respondents terming it as the most corrupt.

It was followed by financial services such as banking and insurance with 10 per cent, defence with 9 per cent, IT/ITES/BPO with 6 per cent and energy and power with 5 per cent.

"The survey shows that corporates cannot just claim to be victims of corruption. They are also responsible for it," Transparency International India Executive Director Anupama Jha said during the launch of the survey.

According to the KPMG survey, 51 per cent respondents expressed apprehension that rising corruption will make India less attractive for foreign investments, while 90 per cent were of the opinion that corruption increases volatility in the stock markets preventing long-term investors from coming to the country.

As many as 99 per cent of the corporations were of the view that the biggest impact of corruption on business was that
it skew the level playing field.

"Besides, 68 per cent respondents were of the view that in many cases corruption is induced by the private sector," KPMG India Executive Director (Forensic Services) said.

While praising certain rules like the Right to Information Act (RTI), majority of the corporate houses surveyed, however, believe the level of corruption in the country will remain the same irrespective of legislation.