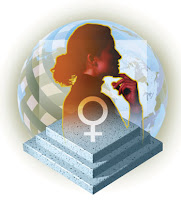 India, Pakistan and Bangladesh may have the highest rates of women's representation at different levels of governance due to quota system, but it has not translated into women occupying leadership positions in these countries, says a new UN report.
More emphasis must be placed on having women elected into leadership positions, says the new report from the United Nations Development Programme (UNDP).

Across different levels of sub-national government, it is countries with quotas such as Bangladesh, India and Pakistan or other affirmative action policies such as Vietnam, which have the largest rates of women's representation, the report says.
"However, this does not translate into women's election to leadership positions such as council chairs or heads," it adds.

More countries in Asia and the Pacific than ever before have elected local governments and national parliaments, yet stronger action is needed to ensure women are elected to local representative and leadership positions, it said.

Local governments offer one of the most important arenas for women's political participation and can have a more direct impact on people's lives and livelihoods than national parliaments.

The report, "Women's Representation in Local Government in Asia and the Pacific", quantifies and analyzes for the first time women's representation at rural, urban, district and provincial levels across the region.

"For most poor people in Asia-Pacific, local governments are the most important political arena. They also have an important role in encouraging women's political participation," it says.