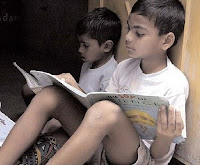 "The expenses have increased due to hike in tuition fees, books, uniform, transportation, tuitions and extra-curricular activities," it added.

The chamber surveyed about 2,000 parents, with a minimum salary of Rs 7 lakh annually, in major cities like Delhi, Mumbai and Kolkata.

The rising cost of education has become a major cause of worry for parents with a majority of them spending more than 18-20 lakh on average on child's schooling, the study said.

The cost of education is increasing every year, parallel to the inflation, it added. The general inflation in February was 8.31 per cent.

The parents' annual income, on an average, has risen up to 32 per cent in the past six years, the study said.

It also said that majority of parents believe it is difficult for a single parent to fund a child's education.
Reactions: