Census of Homeless in Delhi- "another form of corruption" 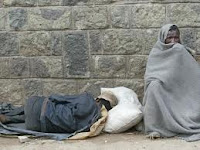 They may have braved the winter chill and roamed many filthy by-lanes at night, but lack of sensitivity on part of enumerators to the poor has made a mockery of the Census of the homeless in the national capital with many of them left out of the process, study revealed.
Enumeration of the homeless in the city was officially concluded on March 1. But, a group of NGOs working for the homeless alleged that the exercise was flawed and a huge number of the destitute were left out of the counting process.
"The whole enumeration process was a farce," said Indo Global Social Service Society (IGSSS), an NGO working with the homeless.

The Census of the homeless in Delhi had turned out to be "another form of corruption", IGSSS added.

While the city has marched ahead of other metropolitan cities in putting up shelters for the homeless, the Census exercise showed that the government was not serious about tackling the issue of homelessness, said Kothari, who is also a former UN Special Rapporteur on Adequate Housing.

An inaccurate enumeration will result in an inaccurate figure of the homeless. It would affect the issue of shelter, as the number of shelters to be set up in a city is decided on the basis of population.

The long term housing-related policy implications of thousands of people being left out during the Census would be grave. It's a case of wilful neglect by the authorities.

In 2000, a study carried out a head-count of the homeless citizens on Delhi roads and found that there were over 52,000 such people in the city. But the 2001 Census came up with a figure of only 24,966 homeless persons in the city.

In 2008, an IGSSS study found 88,410 homeless citizens in Delhi, but the NGO believes that the actual number could be almost double, considering the limitations of a head-count.

Census enumerators surveyed the city's homeless on February 27 and 28, following a mapping exercise. The exercise was extended by another day (March 1) to cover left out areas.
Reactions: