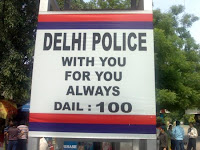 Delhiites can now directly put their problems before Police Commissioner B K Gupta who has decided to open his doors to public everyday beginning Monday (21st Feb.'11).
Gupta will meet complainants and hear their problems for 90 minutes on all weekdays from 12 PM to 1.30 PM and has also instructed other senior officials to follow suit.
"I have to take out some time for the people. We are here for the people. I will be available to hear the grievances from this Monday (21st Feb.'11) on all week days for 90 minutes.... The exercise is to improve functioning of police force in the city," he told.
All Deputy Commissioners of Police, Assistant Commissioners of Police and other senior officials will also be available for the public for two hours -- 12 PM to 2 PM -- at their offices on weekdays and will listen to their grievances and problems from Monday.
"I have been meeting a few complainants now...But I am not doing it everyday. So, I wanted it to happen everyday. I have decided not to give appointments during this time...If at all I get late on some days I will make sure that I spend 90 minutes with the people," he said.
The city police chief said most of the cases which he has been hearing till now were "genuine" and action was being taken.
"Basically people come to the Police Headquarters and complain to the officials so that their cases get expedited. If I meet them, they will have the satisfaction that they have met the city police chief and presented their case," he said.
Gupta said he has also instructed all Assistant Commissioners of Police to visit one police station in their sub-division every day and work there to improve performance.
"We have asked them to log their position with the District Control Room. They will have to be at one police station everyday from 3.30 PM to 5.30 PM. Their visit schedule have to be displayed prominently at police station," he said.
Gupta said the reason behind him asking all senior officials to meet the people and hear their problems was to make functioning of police force in the capital better.
"Once all DCPs, ACPs and others start receiving complaints directly from the people and begin interacting with them, the number of people coming to me will eventually get reduced," the Commissioner said.
"In due course, I will have less visitors," he said.
Gupta said he will also start interacting with his subordinates in different police district through videoconferencing facility from his office.
Reactions: