Cost of living in rural Orissa lowest in the country: report 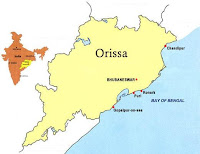 Cost of living in rural Orissa was one of the lowest in the country even as the state government claimed reduction in poverty by 11.73 between 2004-05 and 2007-08. This was part of the Economic Survey 2010-11 report presented at the state assembly.
"The cost of living in urban Orissa also used to be lower than the rest of India in the past. This is, however, no longer the case," the report said.
The rural-urban poverty gap remains larger than all India average. While coastal region registered the sharpest decline of poverty according to 61st round of NSS (national sample survey), the extent of poverty in southern and northern regions is still very high and remains a matter of concern, it said.
Pointing out that the state witnessed wide range of regional and social disparities in development, the report said that all regions have not developed uniformly.
The analysis presented in the survey 2010-11 clearly brings out that there is perceptible structural change in Orissa's economy.
The service sector has become more and more pronounced with its share being 54 per cent of GSDP as per quick estimation of 2009-10.
The share of the industrial sector has increased to 28 per cent and that of the agriculture sector has come down to 18 per cent of GSDP in 2009-10.
"This pattern of diversification in the state economy is in the line with changes at the national and international levels," the report observed.
Though the share of agriculture sector has been declining, the proportion of people dependent on agriculture has not been declining in the same proportion and rate, the report stated terming it as a major concern.
More than 60 per cent of population still depends on the agriculture and allied sectors for their sustenance, the report said adding that major benefits of growth in the service sector and the industrial sector flow largely to those section of population that are educated and have desired skills.
The survey also noted that the state economy has been following a high growth trajectory from 2002-03 onwards. The economy has grown at an annual average rate of 9.51 per cent during the 10th plan and at 9.57 per cent in the first three years of the 11th plan, despite challenges posed by the global economic slow down.
It has, however, been observed that the higher growth in the economy in recent years has been contributed largely by the industrial sector followed by service sector.
Reactions: