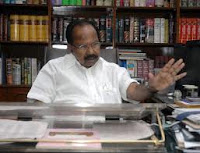 Struggling to bring down the whopping over 3 crore pending court cases in the country, the Law Ministry proposes to soon place before the Union Cabinet a comprehensive National Litigation Policy which aims at disposing of cases within three years.
The proposed policy aims at reducing government litigation which forms a substantial chunk of pending cases.

"The proposed Litigation Policy will soon be before the Union Cabinet for its approval. We have received feedback from other ministries, including the Finance Ministry," Law Minister M Veerappa told.
"The new policy is expected to reduce average pendency time of cases from 15 years to 3 years, " he said, adding that it focuses on core issues like managing and conducting litigation in a cohesive manner.

"I will take all proactive steps to reduce the delays," he said.

The policy also ensures that bad cases are not needlessly pursued while good cases are won.

Several thousands of cases are pending in courts where government employees, both serving and retired, have challenged decisions of their departments with regard to promotions and benefits.

There are other set of cases where the common man has made government departments like PWD, DDA and police parties in their litigations.

In 2011, the government also proposes to bring a Right to Justice Bill on the lines of Right to Education Act to ensure the right to justice is not denied to the common man.

After several rounds of deliberations and much talk, the Law Ministry last year brought before the Cabinet the Judicial Standards and Accountability Bill, 2010.

Due to sharp differences within the Cabinet, the Bill was referred to a Group of Ministers. After getting its nod, the Bill was cleared by the Cabinet in October and introduced in the Lok Sabha in the just held Winter Session.

According to the Bill, which is likely to be referred to a Standing Committee of Parliament, judges of the Supreme Court and High Courts would be subject to scrutiny of a high-level committee and those facing serious charges of misconduct may be asked to step down.

The much-delayed Bill provides for setting up of a five-member Oversight Committee to be headed by a former Chief Justice of India and including the Attorney General to go into complaints against members of the higher judiciary.

In 2009, the Law Ministry had received a major setback during the Monsoon Session of Parliament when Moily was forced to defer tabling the Judges Assets Bill in the Rajya Sabha as the combined Opposition -- and some Congress members -- objected to a particular clause that while judges will declare their assets, the same could not be put in public domain.

Moily had then assured to evolve a political consensus on the issue and bring out a comprehensive bill on judicial reforms.

In January, opposition parties moved an impeachment motion against Justice Dinakaran in Rajya Sabha.Allegations listed in the impeachment motion against Justice Dinakaran include possessing wealth disproportionate to his known sources of income, unlawfully securing five housing board plots in the name of his wife and two daughters and entering into benami transactions.

In March this year, the Supreme Court Collegium had asked Justice Dinakaran to proceed on leave but he did not do so. The Collegium then recommended his transfer to another High Court. Dinakaran was moved as Chief Justice of the Sikkim High Court.

Government's plan to set up commercial divisions in High Courts to settle high value litigations received a setback in July when a parliamentary select committee recommended several changes in the Bill, including reducing the threshold limit from Rs five crore to one crore.

The Commercial Division of High Courts Bill, 2009 was passed in the Lok Sabha without discussion. But when the Bill was tabled in the Rajya Sabha, it was referred to a select committee in December last year for further examination.

The Bill seeks to set up commercial divisions in High Courts to deal with litigations arising out of monitory transactions above Rs five crore.

As the government pushed for reforms in judiciary, the Law Ministry said the procedure of Collegium appointing judges to higher courts may undergo transformation in the wake of allegations of lack of transparency and delays.

Moily said the government was "thinking" of making changes in the appointment procedures as the present practice (Collegium) does not "fully reflect" the two Supreme Court judgements, which led to creation of the existing system.

India may be among the few countries in the world where judges appoint themselves, a practice that started after 1993 replacing the system of government picking the judges for higher judiciary.

He said the changes could be made either through judicial action or legislative method.

The draft of revised Memorandum of Procedure was referred to the then Chief Justice K G Balakrishnan for his opinion. Balakrishnan after his retirement said he has left the decision on the present incumbent Justice S H Kapadia.

After the two apex court judgements, the Memorandum of Procedure was adopted with the consent of the government and the judiciary.

Taking lessons from the verdict on the Bhopal gas tragedy, the Law Ministry during the year gone by started working on drafting a stand alone law to deal with man-made disasters.

"I would be working on a stand alone law to deal with man-made disasters which should be ready in the next six months," Moily had said soon after the Bhopal verdict came out.

He said the proposed legislation would deal with issues relating to compensation in case of disasters.

"The Law of Torts in India are not codified...There is a need to codify such laws," he said. Law of Torts deal with compensation in cases where respondents are not directly liable.

The Ministry's image received a beating when when one of its legal advisors, Dr Santokh Singh, was suspended recently after a probe was ordered against him to investigate his role in advising the DoT on second-generation mobile telephony spectrum allocation.

The affidavit was filed by the DoT in response to a PIL filed by Janata Party leader Subramanian Swamy seeking sanction for launching prosecution proceedings against former Telecom Minister A Raja and others allegedly involved in the scam.

In the affidavit, the DoT had denied the allegations that it ignored advise of the prime minister, the finance secretary and the ministry of law and justice over allotment of spectrum and said all licences were given "as per law and in keeping with the extant policy and procedures".

As part of a scheme to decongest jails, the Law Ministry began a six-month exercise on January 26 to release or grant bail to undertrials languishing in prisons.

According to latest figures made available by the Law Ministry, 1,35,664 undertrials were released or granted bail between January 26 and July 31.