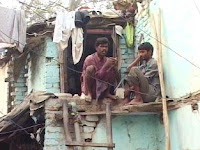 In good news for slum dwellers, Delhi Government decided to distribute nearly 15,000 low-cost houses to them and the allotment of the flats will begin within next two months.
A high-level meeting presided over by Chief Minister Sheila Dikshit decided that those who have settled in a slum or jhughi jhopri cluster not later than March 31, 2007 will be eligible to get allotment of the low cost houses. Earlier, the cut off date was March 31, 2002.
It raised eligibility criteria of annual family income from Rs 60,000 to Rs one lakh to get allotment of the flats built under the JNNURM scheme.
In the meeting, Dikshit gave clear instruction to the Delhi Urban Development department to initiate the process of allotment of the houses as soon as possible. Officials said the actual allotment of the flats will begin before March.
"The dream of a poor man to own a house in Delhi is coming to be true very soon," Dikshit said after the meeting of the Delhi Urban Shelter Improvement Board (DUSIB).Officials said government has already completed construction of 9,660 flats in Narela, Dwarka, Bhorgarh under the JNNURM scheme and another 5184 flats are likely to be completed very soon.
"In order to make Delhi slum-free, it is imperative to initiate process of allotment of already built houses as the aspirants have been impatiently waiting to have their own houses in the city," Dikshit said.
The meeting was attended by Urban Development Minister A K Walia, PWD Minister Raj Kumar Chauhan, Labour Minister Mangat Ram Singhal, Chief Secretary Rakesh Mehta, NDMC Chairperson Parimal Rai besides several top officials from various other departments.
"The government is committed to provide low-cost houses to the maximum number of slum dwellers and members of the other weaker sections," CM Dikshit said.
The DUSIB has already initiated a process to identify eligible applicants by undertaking survey in 46 JJ clusters for relocation.The Board has also been directed to undertake another survey in view of amendment in two crucial eligibility criteria. In order to expedite the process it has been decided to organise camps in the clusters itself.
Reactions: