SC orders DDA to rebuild night shelters for all homeless 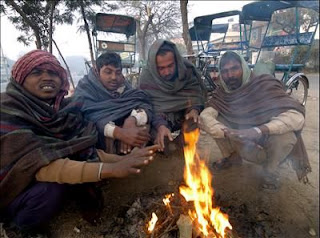 The Supreme Court Thursday directed all states and union territories to ensure that no night shelter was demolished amid the biting winter cold and slammed the Delhi Development Authority for demolishing two such facilities in New Delhi.
Rebuking DDA for demolishing two of the 64 shelters built by the Delhi government last year on the court's instructions, a bench of justices Dalveer Bhandari and Deepak Verma ordered that they be rebuilt within three days.

The bench issued the orders, taking suo motu cognisance of the news reports on demolition of two night shelters by DDA at Nehru Place and Kalkaji, forcing destitutes to brave the biting winter chill in the open.
The apex court said that as a welfare state it was the duty of the government to ensure that not a single citizen across the country sleeps under the open sky in such "intense" winter.

"We are greatly anguished, disappointed and astonished as to how could the authorities be so insensitive, impervious and callous when the winter is so intense," the bench said, referring to the demolition of the two night shelters by the DDA.

The apex court pointed out that the Delhi government has installed 64 permanent night shelters in pursuant to the bench's direction last year, but the DDA authorities betrayed utter callousness and insensitive in demolishing two of them.

At one stage, the apex court warned that it could have initiated contempt of court proceedings against the DDA vice chairperson for demolition of the two night shelters, which had been built on the court's orders.

The bench, however, proceeded to order DDA to launch a probe into the demolitions and identify the officials responsible for it.

It directed DDA to take appropriate disciplinary actions against the officials responsible for demolition.

The bench further asked Additional Solicitor General to visit one of the night shelters in the capital and find out first hand the conditions prevailing there.

The directions were passed after senior Counsel Colin Gonsalves, appearing for People's Union for Civil Liberties (PUCL), alleged that out of 64 night shelters, only 25 were operational and the remaining ones were defunct. He also submitted photographs to support his allegations.